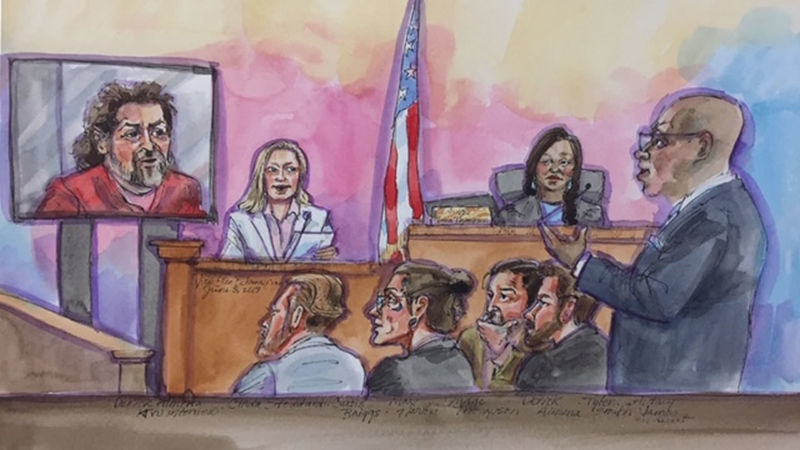 OAKLAND, Calif. (KGO) -- "They ended not with a bang, but a whimper," said veteran defense attorney Tony Serra as he exited an Oakland courtroom.

Serra is clearly unimpressed with the Alameda County District Attorneys' case against his client Derick Almena, the self-proclaimed founder of the Oakland arts collective that came to be known as the Ghost Ship.

Prosecutors wrapped up their case with a DA investigator and a series of emails from Almena and Max Harris, who called himself the Ghost Ship's "executive director" in several of the writings.

Prosecutors also played a portion of a media interview done by Almena last summer, in which he claims the warehouse was equipped with unspecified "safety" equipment.

The DA inspector testified her investigation found no sprinklers, fire alarms, or illuminated exit signs. Firefighters did recover one smoke detector in the rubble of the fire that killed 36 people in December 2016.

"I don't think they made their case against Derick Almena," said Brian Goetz, another attorney for Almena. "They certainly made the case that there was an enormous tragedy in Oakland, that it was heartbreaking."
Next Monday, defense attorneys will begin presenting their side of the case. Almena is expected to take the stand and testify in his own defense.

#DEVELOPING #GHOSTSHIPTRIAL Defense attorneys say both Derick Almena and Max Harris will take the stand and testify in their own defense. #abc7now pic.twitter.com/tWHe2MUlsv

"Let me just tell you what I anticipate," said Serra. "He will be honest, so when he said for instance on a number of occasions that no one lived there, he's going to admit that. The only reason he told people no one was living there is that the landlord requested it."

The landlord Chor Ng was not charged in the criminal case, but is named as a defendant in the civil lawsuit brought by Ghost Ship survivors and families of the victims.

See more stories and videos about the Ghost Ship fire.

#BREAKING #GHOSTSHIPTRIAL Prosecution has rested its case against defendants Derick Almena and Max Harris with testimony from DA Investigator and emalls showing Almena claiming to have permits he did not have...and Harris claiming to be the “executive director” of the Ghost Ship

#HAPPENINGNOW #GHOSTSHIPTRIAL Prosecution wrapping up its case...showing emails from Max Harris in which he calls himself the “executive director” of the Ghost Ship. #abc7now