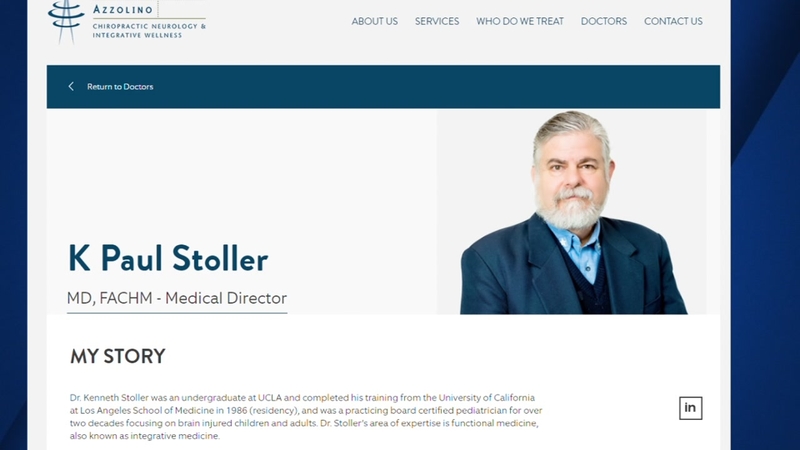 RELATED: Germany proposes $2,790 fine for unvaccinated children amid measles outbreak in US

The City Attorney's Office is investigating whether Dr. Stoller violated state nuisance laws by providing medical exemptions for patients who didn't qualify for them.

"As a community, we have a responsibility to each other," Herrera said. "If someone uses a medical exemption they don't qualify for and introduces unvaccinated children into that environment, the kids who legitimately can't get a vaccine - and ultimately the general public - are the ones in real danger."

Jaffe is skeptical about the city attorney's legal argument.

"We have some questions about how a medical doctor's practice in making a medical decision could constitute a public a nuisance. I suspect that would be unprecedented," said Dr. Stoller's attorney Rick Jaffe.
RELATED: Measles cases top 700 this year in the United States

Under a law which took effect in 2016, students attending any public or private school in California must be vaccinated unless they qualify for a valid medical exemption approved by a doctor.

Dr. Stoller is a prominent anti-vaccine advocate who has appeared at a rally in Sacramento against that 2016 law.

He's listed as a member of the leadership team for 'Physicans For Informed Consent', whose stated vision is "to live in a society free of mandatory vaccination laws."

In his profile on the group's website Dr. Stoller recalled the personal moment that sparked his interest in the anti-vaccine movement:

"I spent years trying to find out how I became temporarily paralyzed at the age of four while attending the birthday party of a neighbor who was turning five. Eventually I compared notes with an elderly man who had developed polio in his youth, and then asked my mother if I had been vaccinated with the polio vaccine (circa 1960) around the time of the neighbor's birthday party. As it turned out, I had been vaccinated two weeks before the paralysis I experienced. Thus, having been vaccine-injured myself, it altered the way I evaluated the efficacy and safety of vaccines."

On his Linkedin profile, he also describes himself as an expert on Hyperbaric Oxygen Therapy at a San Francisco clinic. On that clinic's website, Dr. Stoller is described as "He has been working with patients with brain injuries ranging from traumatic brain injury, stroke, autism, cerebral palsy, MS, chemo-brain, and Lyme brain since the late 1990s. His knowledge of esoteric complementary medicine has made him a sought after speaker and numerous Integrative Medicine conferences."

"This is part of an ongoing investigation into whether or not that particular doctor was granting medical exemptions to patients who didn't qualify for them," said John Cote of the City Attorney's office.

There's no hiding the fact that Stoller has issued medical exemptions for vaccination purposes.

We found what people had written on Google Reviews about his work.

"I am so grateful to have found him to help my son regarding vaccinations."

Another person posted, "We sought out Dr. Stoller when in the middle of Spring of last year my daughters were being asked for new vaccine exemptions."

Senate Bill 277 which went into effect in 2016 says you can no longer cite religious or personal beliefs to get out of vaccinating children. But the two state senators behind 277 allowed for medical exemptions which include a person's family history.

Dr. Stoller's attorney said his client has done nothing wrong.

"There is a group of doctors in California that have taken these two senators at their word and are issuing broader indicators based on family history just like these senators said they could do," expressed attorney Rick Jaffe.

But now State Senator Richard Pan, one of the authors of the bill says the law has been exploited by some doctors.

"You know we're having measles showing up, people are bringing it into our state and we can't have measles spreading rapidly through a school," said Dr. Pan.