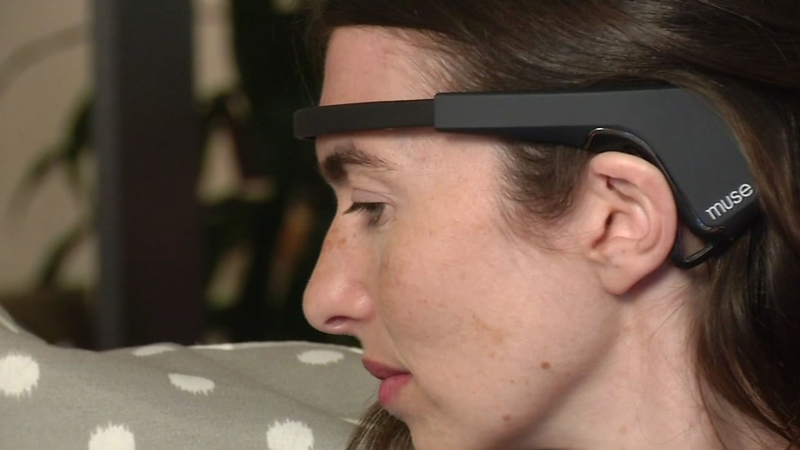 SAN FRANCISCO (KGO) -- A new gadget that's just hit the market comes closer than ever to reading a person's mind. It's not science fiction, but actual science that's packed into the high-tech headband called Muse.

For example, a person could use Muse to pour a beer by just thinking about it, provided that person had the right technology.

"Now to be very clear, we can't read your thoughts, we're not reading, pour beer, pour, we're reading an increase in a particular brain wave band and we're using that as a trigger," Garten said.

The headband doesn't have any messy electrodes, rather it uses conductive rubber and conductive ink.

For $300 dollars, Muse ships with an app that teaches customers how to control their brain waves with an interactive meditation. When someone's mind is quiet, the app plays the sound of birds chirping. When a person is distracted, he will hear the sound of wind blowing. The app then shows a scale of peaks and valleys that represent brain activity. A spike means something created a distraction and a valley is a relaxed mind.

"I get emails all the time from people talking about how Muse has changed their life," Garten said.

Muse looks similar to another wearable device, Google Glass, and some people have already questioned if those sensors can be built in the next version of Google Glass.

"Ultimately, brain sensing technology is going to become integrated into the other techs and devices that we wear," Garten added.

But for now, VentureBeat's Devindra Hardawar told ABC7 News reporter Jonathan Bloom over Skype that he likes Muse as it is. "What I was surprised by is just how well it works," Hardawar said. "After using it for a while, I started to feel the effects of feeling calmer and more relaxed and having a more focused mind."