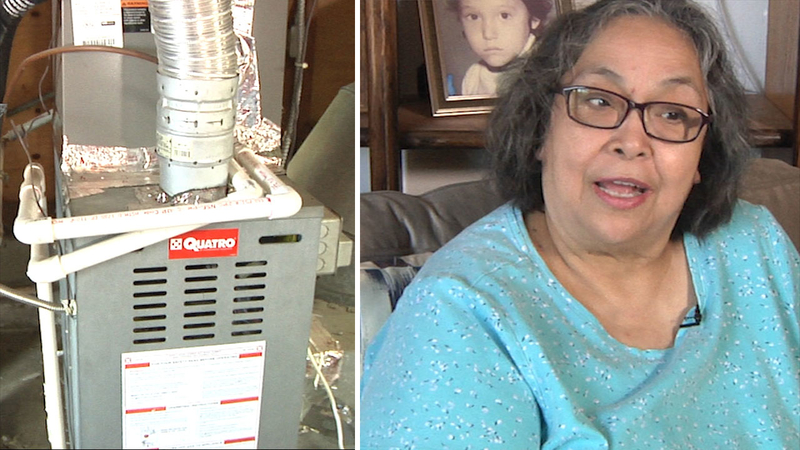 EL SOBRANTE, Calif. (KGO) -- Home warranties are supposed to cover you when something breaks in your house, but do they really? An East Bay viewer says she had a rude awakening -- instead of helping when she needed it most, she says the warranty only added to her stress.

The Bay Area was sweltering in record heat. Of course, that's exactly when the air conditioner conked out at Yolanda Aguirre's El Sobrante home.

"My son noticed it was leaking water," Aguirre explained. A pool of water had gathered under the furnace -- and the air conditioner was blowing warm air.

But no problem: Aguirre had purchased insurance from First American Home Warranty for just this kind of breakdown.

"When I called first American, they did send someone out," she said.

However, things did not go so well. The technician didn't say long -- and what he said was shocking.

"Two minutes after he went in there, he said you tampered this and your home warranty doesn't cover you tampering it. I said I didn't tamper it, I don't even come down here," Aguirre said.

The technician claimed Aguirre had deliberately damaged the furnace and cooling unit -- presumably to get it serviced.

"That because I had broken the furnace, that the warranty was now null and void. And then he left. He didn't take pictures, didn't go look at the furnace," said Aguirre.

Aguirre called the man who sold her the policy, telling him she never damaged any such thing. She wanted her repair.

"I willingly paid whatever amount they asked of me, but yet when I needed them... They didn't step up to the plate," she said.

First American refused to reopen her case, sending her a letter saying the unit broke due to "abnormal wear and tear." Her claim was denied.

Yolanda was crestfallen. She had paid $600 for nine months of coverage and couldn't get help. "It's really emotionally draining, especially when you get older, as a senior citizen," she said.

Yolanda contacted 7 On Your Side. We contacted First American. Right away, the company sent out a different technician.

One new part, and instantly cool air blew into her house. "And I think they did a great job," Aguirre declared.

"First American is committed to providing our customers with superior service and value. After a second opinion from a contractor, First American Home Warranty determined repair of the furnace was covered under our customer's policy and the company facilitated the repair."

First American did not address why the first technician didn't repair the furnace, or why he accused Aguirre of tampering. She's just glad things have cooled off.