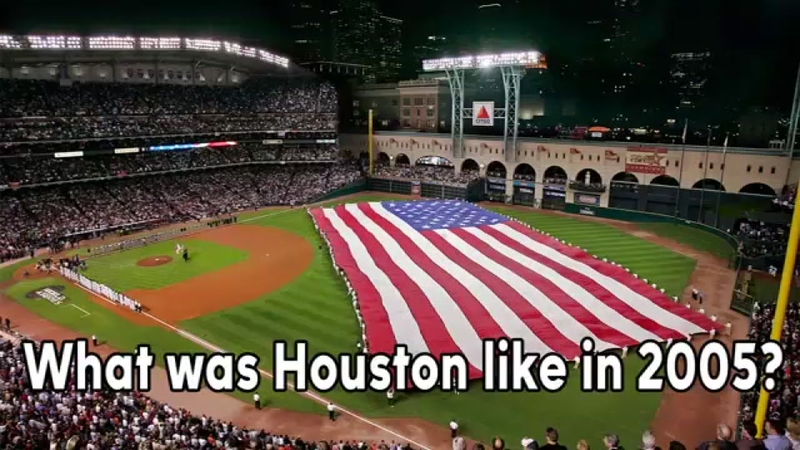 HOUSTON -- The Astros are in the World Series for the first time since 2005. While that may not seem like so long ago, the world was a different place 12 years ago. Let's take a look back at 2005.

Tom Cruise jumped on Oprah's couch, Jennifer Aniston divorced Brad Pitt, Destiny's Child announced their official breakup, and sites like Facebook and MySpace expanded to include high school students.
As a country we watched the devastation of Hurricane Katrina and the legal battle of Terri Schiavo, but what was happening in Houston?

In 2005, Houston was saying goodbye to a landmark that is still missed to this day, AstroWorld. It's hard to believe it's been gone for more than a decade. Ever since, Houstonians have been waiting for a new theme park to no avail.

Art Briles was the University of Houston football coach. He became one of many coaches to leave Houston for a Power 5 conference team. While he had success on the field at Baylor, his reputation is forever entangled with the major sexual assault scandal in his football program.

As we now reel from the effects of Harvey, we remember that in 2005 we were reeling from Hurricane Rita.

Hurricane Rita swirled toward the Gulf Coast as a Category 5, 165-mph monster as more than 1.3 million people in Texas and Louisiana were evacuated, with many stuck on the roads for hours and hours in gridlocked traffic. The tragedy of Hurricane Katrina weighed heavily on everyone's minds as Rita was thought to be even more powerful.

The promised peril from the Category 5 storm never materialized. Rita weakened to Category 3 before coming ashore in east Texas. The storm still did $12 billion in damage. In the Houston area, the muddled flight from the city killed almost as many people as Rita did.

More than 100 evacuees died in the mass exodus including 24 nursing home residents whose bus caught on fire, as well as others in accidents and from heat stroke.

The Houston Rodeo had some familiar names at the time like Brooks & Dunn, Clay Walker, Alan Jackson, Kenny Chesney and Clint Black.

The only wins sports fans of Houston were getting that year were from the Astros as the Texans went 2-14 that season and despite having Yao Ming, the Rockets went 34-48.

While much has changed, the heart of Houston remains. After everything, Houstonians are still kind, enduring and hardworking people that are ready to win the World Series.

Can today's Astros out do the "Killer B's" and bring home the Commissioner's Trophy? Only time will tell.