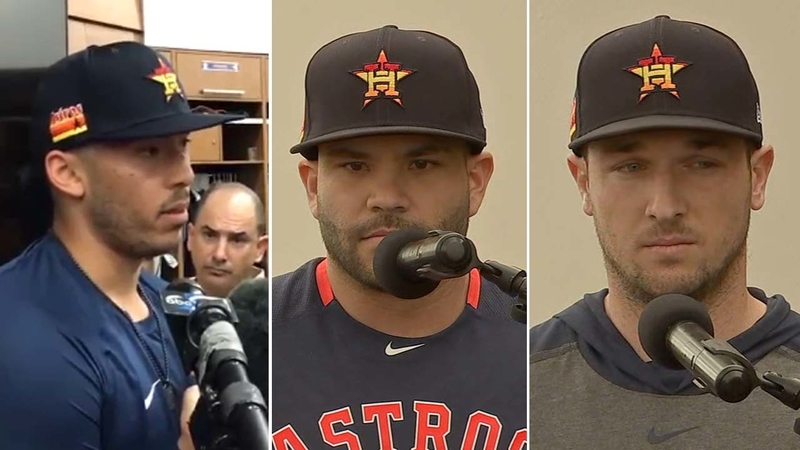 On Thursday, owner Jim Crane and the players held a press conference at their facility, FITTEAM Ballpark of the Palm Beaches, where they apologized for the first time for their role in the sign stealing scandal.

Jose Altuve and Alex Bregman were the only two players to deliver brief, prepared remarks at the podium.

They said a players' meeting was also held Wednesday night. Crane said it was the first time the group was all together as a team since the scandal broke, explaining that some of the players were emotional.

It was also the first time that new manager Dusty Baker had met a lot of the team. Baker said the players "displayed tremendous remorse."

Speaking first at the podium, Bregman apologized on behalf of the team, the organization and himself.

"I've learned from this and I hope to regain the trust of baseball fans. I would also like to thank the Astros fans for all of their support. We as a team are totally focused on moving forward to the 2020 season," Bregman said.

"I'm really sorry about the choices that were made by my team, my organization and me," Alex Bregman said.

"The whole Astros organization and the team feel bad about what happened in 2017. We especially feel remorse for the impact on our fans and the game of baseball," Altuve said.

In 2017, Altuve was named the MVP. Bregman also had a breakout season.

This is what Houston's Jose Altuve had to say about the scandal and what to expect this season.

Crane, who has apologized before, emphasized again that this would not happen on his watch.

Crane also called the team a "great group of guys" and said this happened at a time when they did not receive proper guidance from their leaders.

In the fallout, Astros general manager Jeff Luhnow and manager AJ Hinch were both fired. No players were disciplined.

Baker took over as the new manager at the end of January. James Click became the new general manager, replacing Luhnow.

"It was definitely wrong and we should have stopped it at the time," Correa said.

Fascinating day for the #Astros. The players express remorse and apologize for cheating scheme but will not apologize for winning the ‘17 World Series and will not address #Dodgers or #Yankees players.

#Astros Correa: It was wrong. pic.twitter.com/Kq8E6vvFnr

WATCH: "The best way to erase the cheating scandal is to win another title" Carlos Correa on sign stealing
EMBED More News Videos

Astros' Carlos Correa speaks out for the first time about the World Series cheating scandal in 2017.

Last month, the pair talked to media at Astros FanFest, where most of the questions asked were about the scandal.

When asked during the event if he has any regrets about the 2017 season, Bregman said, "The commissioner came out with a report, MLB did their report, and the Astros did what they did, meaning they made their decision on what they're going to do. I have no other thoughts on it."

Altuve was more vocal, explaining that it was crucial the team stick together and move forward.

Both were quick to deny allegations that they wore devices under their jerseys.

On Thursday, Crane was pressed again about the accusations, but said he was confident the players did not wear them.

#Astros Jim Crane is confident players did not wear buzzers. States it clearly and asked them to make sure.

#Astros Jim Crane apologizes for the scheme and for breaking the rules but he will not admit the Astros won the World Series because of cheating.

Some teams have called for the Astros' World Series title to be stripped, but the league has said that won't happen.

Crane also said he doesn't feel it necessary to reach out to the Los Angeles Dodgers, whom the Astros beat for the championship in 2017.