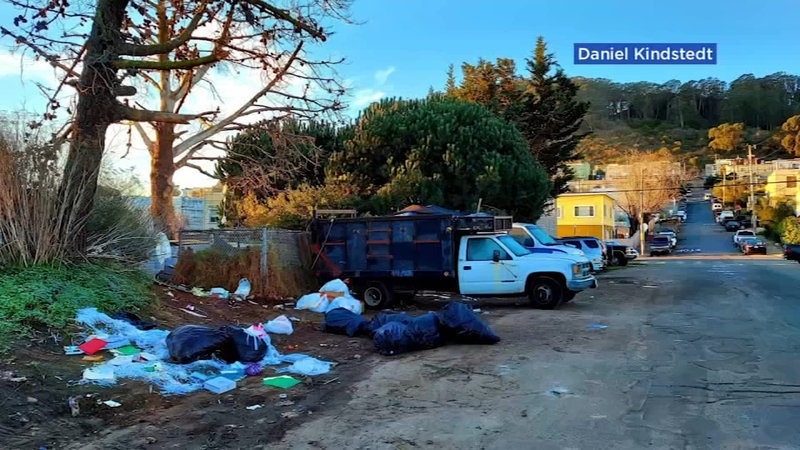 SAN FRANCISCO (KGO) -- ABC7 News continues to focus on public safety in the Bay Area. Neighbors in the Bay View District reached out to us after several of their complaints regarding illegal dumping and traffic violations were not heard.

Neighbors began taking pictures after complaining that the block of Hawes Street between Gilman and Fitzgerald has become a place to illegally dump trash and old appliances.

Recently some of it caught on fire and could have spread to surrounding homes.

Here's the rub -- This is what the city calls an "unaccepted street," meaning they're not responsible for the pickup.

ABC7 News reporter Lyanne Melendez did some research. It shall be the duty of the owners of lots. If they don't it, Section 400.5 says the Director of Public Works shall remove or cause to be removed the rubbish or debris.

We contacted the Department of Public Works. They told us they run an illegal dumping operation in the area twice a week with Recology.

A new survey finds the majority of San Franciscans say the quality of life has gotten worse over the past few years.

But Daniel Kindstedt, a neighbor, says the trash never seems to go away. He told us the trash and debris had been there for months.

For now, much of that trash has been cleared. But the mayor says the city will continue to crack down on illegal dumping.

Board President Shamman Walton represents the Bayview District. He says surveillance cameras will now be installed in hot spots like this one.

Residents in the South Bay living near a massive illegal dump site in South San Jose said they are tired of excuses and inaction from city leaders.

Then there's the issue of parking enforcement or, in this case, the lack of.

During the day people park in front of fire hydrants, block the yellow pads used by people with disabilities, and at night, the sidewalks are taken up by parked cars. Supervisor Walton says there's a reason for having so many cars in the area.

"We have a lot of people who live in homes and who drive because of the lack of transportation opportunities and so we have to improve transportation first," explained Walton.

Speeding is another issue and Kindstedt says nothing is done. We spent three hours near that intersection and did not see a single police patrol car.

"I drive around the city a lot, I don't see it being this bad in any other neighborhood and that really bothers me," added Kindstedt.