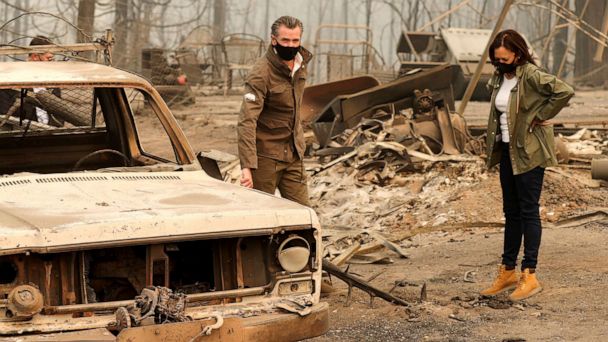 Sen. Kamala Harris, the Democratic vice presidential nominee, is in her home state of California a day after President Donald Trump's visit there as massive wildfires decimate communities across the West Coast.

Harris was briefed on the impact of the California wildfires at Pine Ridge School in Auberry, California. The community is located 30 miles outside of the city of Fresno and was ravaged by the Creek Fire which, according to a California official, is the 12th largest in California history. Five of the 20 largest fires in California have burned this year.


She spoke with emergency response officials alongside California Gov. Gavin Newsom, who confronted President Donald Trump Monday about climate change while the president dismissed it.

"Sadly, these wildfires and the devastation they cause are utterly predictable," Harris told reporters. "Especially in residential areas, and you'll see where the fire has just swept through. Everything is gone except the chimney... Those chimneys remind me of tombstones." This is Harris' first trip to California since accepting the Democratic vice-presidential nomination, and it coincides with the reemergence of climate change as a campaign issue.

During a grassroots fundraiser Monday with Hillary Clinton, Harris condemned Trump's stance on the issue.

"The fact is that we are in the midst of an incredible crisis, because our climate is changing in drastic form, which is leading to California burning in many places, which is leading to storms hitting our Gulf Coast repeatedly year after year and getting worse," Harris said. "And we have a president in Donald Trump who has pretty much denied the science and even today, could not with the full voice, speak to the fact that we have to address this and we have to address it around projection of what's predictable, in terms of not only drought, but electrical fires based on lightning, which is part of what we saw in California."

During former Vice President Joe Biden's remarks on the wildfires Monday, he referred to Trump as a "climate arsonist."

Trump was briefed Monday in Sacramento by a panel including the California Secretary of Natural Resources Wade Crawfoot.


"We want to work with you to really recognize the changing climate and what it means to our forests, and actually work together with that science," Crawfoot told Trump. "That science is gonna be key because if we -- if we ignore that science, and sort of put our head in the sand and think it's all about vegetation management, we're not going to succeed together, protecting Californians."

"I wish science agreed with you," Crawfoot replied.

More than 3.3 million acres have been burned in the Golden State this year -- more than 27 times more than in 2019, according to the California Department of Forestry and Fire Protection. The wildfires also claimed the lives of 27 people last week.