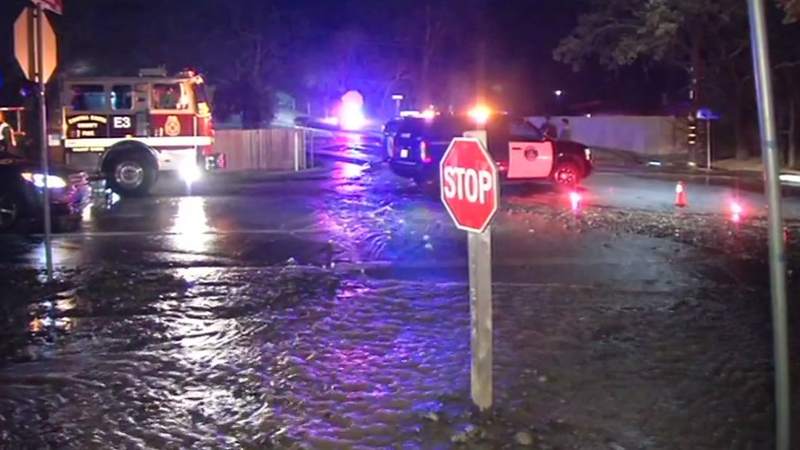 LAFAYETTE, Calif. (KGO) -- A neighborhood in Lafayette was flooded with clean water after pipes burst. It was discovered at Reliez Station Road and Olympic Boulevard late Friday afternoon.

The broken pipe caused a huge sloppy mess out and as of late Friday evening, 35 customers were without water.

East Bay Municipal Utilities District stopped the water from flowing through the intersection by about 11 p.m. and crews worked to clean up the mess. Meanwhile, another crew worked to replace the broken pipe, which they said could take 16 hours to fix.

The 16-inch water main that broke in Lafayette turned Reliez Station Road, near Olympic Blvd, into a waterfall.

"It was scary at first because it was coming down so fast, and so much," homeowner Debbie Hunter said.

The pipe broke and the road buckled around 4:30 p.m. Thousands of gallons of water rushed to the surface carrying rocks and mud through the neighborhood at the bottom of the hill.

"I came home later on and I had to walk in here through basically a flood on the street," homeowner Greg Hunter said.

Lafayette city contract crews quickly built a dam with sand bags to divert the waterflow away from the homes.

"It's going good. We got everything blocked off right there and down the hill a little bit more, signs are out so people know the roads are to be closed, and that there is going to be detours and stuff," Thomas Vigil, who is with the Lafayette road crew, said.

It seems to have worked. The flood caused only exterior damage to seven homes. East Bay Municipal Utilities District says it's not sure what caused the break, but the pipe that burst was old.

"The cast iron pipe is one of our oldest types of pipe. It's more than 60 years old. It could have been corrosion. It could have just been age," EBMUD spokesperson Nelsy Rodriguez said.

The valves were shut off, but the water is expected to flow until the pipes bleed out. Meanwhile, crews will be digging up the old pipe to replace it and hoping the muddy water doesn't freeze while they're working.