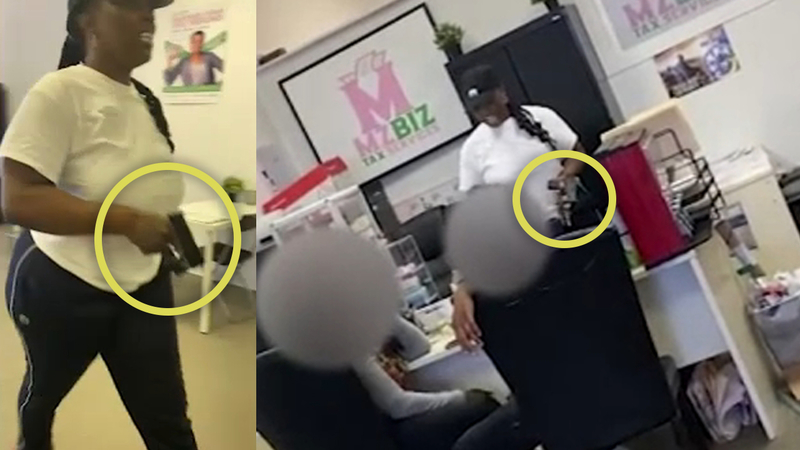 HOUSTON, Texas -- A tax preparer is now in jail after pulling a gun on customers who say they noticed issues with the tax return that she filed for them.

The incident was all caught on camera.

Marquita Boyle said she pulled out her phone and started recording the situation because she didn't know what else to do.

She said she is being audited by the IRS after using the tax services at Latunya Wright's business in north Houston. On Thursday, she went to the business, called MZ BIZ, to look over her paperwork after noticing some discrepancies.

She said Wright, already arguing with other customers, pulled out a gun and cocked it at the client. She added Wright was blocking the front door with the gun still in her hand.

Unsure what to do, Boyle pulled out her phone to record what was happening. She said when Wright saw she had her phone out, she took it from her, hit her on the head and attempted to delete the video.

Law enforcement was called to the business and Wright was arrested. She is behind bars with the Harris Co. Sheriff's Office facing multiple charges, including aggravated robbery and assault.

Eyewitness News learned in 2012, Wright was sentenced to more than four years in federal prison for her part in a multi-million dollar heist at an ATM servicing company. MZ BIZ was closed on Friday and no one has returned messages left by ABC13.

Boyle was taken to the hospital in an ambulance. She said she is in total disbelief that this happened. She says she still has the task of trying to fix the issue with her taxes.