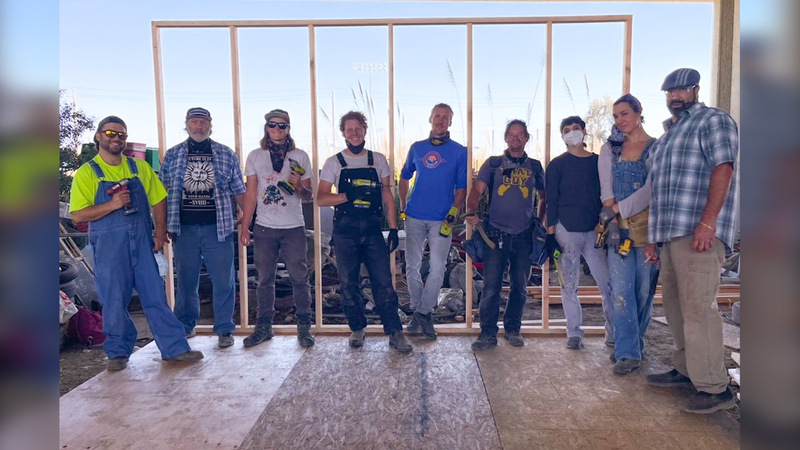 Artists Building Communities is a group of artists and entertainment workers who wanted to help an underserved population that was heavily impacted by the COVID-19 pandemic.

"We are just a group of artists who were all unemployed at the same time, in the beginning of COVID, and needed something to do to cope with the craziness of the world," said Ann Marie Bustamante, Co-Founder of Artists Building Communities. "And saw our neighbors under threat of eviction. We started building tiny homes to give them that extra security."

Under Interstate 880 in West Oakland, an unhoused community live in cars and tents surrounded by massive piles of garbage.

"It is challenging not to have a shelter," said Dmitry Shusterman, an Unhoused Activist. "Just to have a little bit of security of a home, you know, it's huge. It changes peoples' lives."

Artists Building Communities created a GoFundMe Page to raise funds to help build tiny homes in the Wood Street encampment - one of the largest encampments in Oakland.

"In Oakland, you see tons of tent cities all over the place," said Bustamante. "People build their own structures, people are in cars, RV's, all kinds of things."

According to the Oakland City's Audit, there are at least 140 encampments within the city.

Since March, artists and entertainment industry workers were able to transfer their talents and skills to build eight tiny homes.

"We want to come out and do something useful for the community because we don't really see anything being done on a city or state level for them," said Luke Swanson, an Oakland Musician. "I enjoy getting to know the residents and it's just nice to be able to see that we have been able to provide something concrete. This is just a small solution that gets it started and hopefully leads to something else."

According to Artists Building Communities, there are approximately 150 people that live within the Wood Street encampment.

"Artist Building Communities is trying to push a housing first approach," said Bustamante. "We want to prove to the city of Oakland, the Bay Area, and the nation that if someone has this basic resource so many things in their life will improve."

People living in the Wood Street encampment work as a unit to vote who should be the next resident to live in a new tiny home.

Kellie Castillo lived in the streets of Oakland for over a decade and was one of the first recipients of a tiny home.

"I was thrilled, you feel safe," said Castillo. "Whether or not it provides safety, you still feel safe. You are definitely safer than staying in a tent. It is really nice to have."

"It's amazing, to be able to not only provide dignity, health, safety, security is what we're doing," said Bustamante. "That is medicine, that is great."