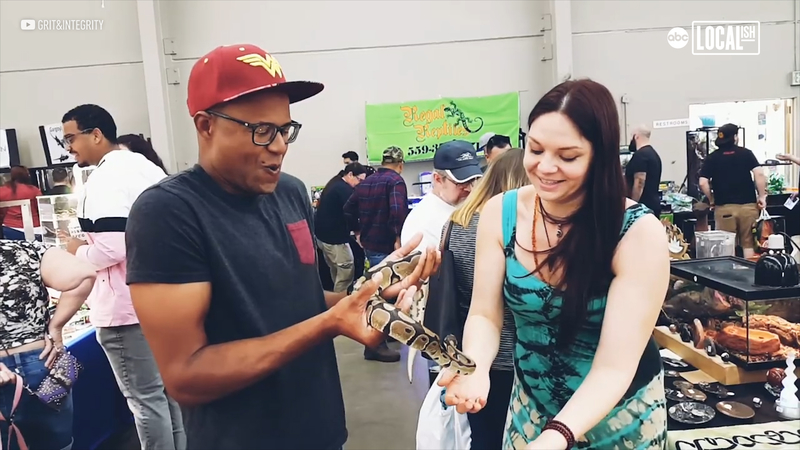 FRESNO, Calif. -- A Fresno teacher is facing his fears with the hope of inspiring his students to do the same.

"I didn't want to be one of those teachers that tells them to do something, but I wasn't going to do it myself," said Terron Nolan, a fifth-year teacher at Robinson Elementary in Northeast Fresno. "So I said, 'okay guys, I will write down all of my fears and I will face them if you promise to face one of your fears.' And they took me up on that."

Nolan recently launched "The Fearlist," a series on his YouTube channel "Grit&Integrity" that showcases him facing his worst fears. So far, he's held a snake, done standup comedy, rode a horse and jumped off a 45-foot pole.

"It was terrifying, it didn't go well," he said of the comedy bit.

Nolan teaches sixth grade and says conversations with his students inspired him to start the video series.

"I've had students come to me and say, yesterday we got evicted. We don't have anywhere to live, or my parent is getting out of jail, and I'm really freaking out because I have to find housing. Those kinds of things really break my heart," he said.

"I realized that they're making their decisions without anyone showing them how to walk through fear. So for me, that was my big motivation is, let me walk with you through this and show you how to face these fears and realize that there's another world, there's beauty on the other side of fear."

His students have responded. As Nolan faces his fears, students are challenged to do the same and write about it by the end of the year.

"Mr. Nolan is like a totally different teacher from others, he teaches us his own way, and that's a very special way," said Eyana Williams, one of his students.

"I would have him for the rest of my life as a teacher... that's how fun he is," said another student, Beckhum Lor.

Nolan says he'll continue to make the videos as long as his students are being inspired - and he's hoping it'll teach his students to keep fear from holding them back.

"I had a student who was going through a really hard time at home. And he said, Mr. Nolan, I watched your video. And it made me realize I can go through this situation. And I'll be okay," Nolan said.

"If they can live through the things that they have to live through, they can face those fears that I have never even imagined in my life, then I can do this. And if that inspires into them to push through, I gotta do it."