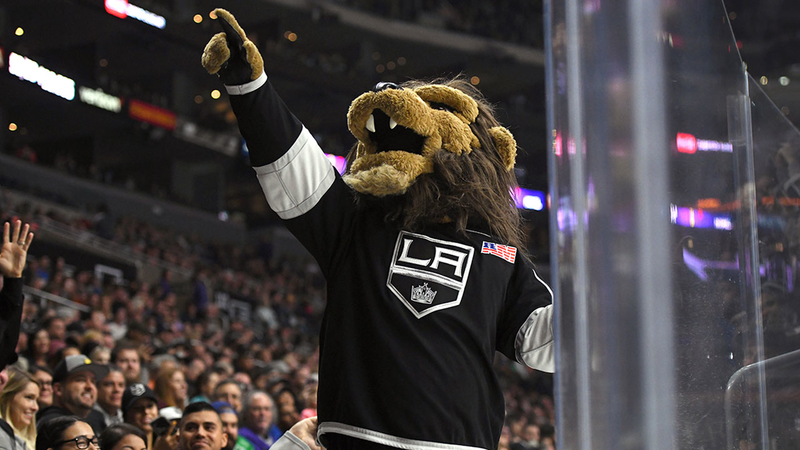 LOS ANGELES -- The man who appears as Bailey, the Los Angeles Kings mascot, is being sued for allegedly groping the buttocks of a dishwasher in a Staples Center elevator in 2016.

Plaintiff Maso Griffin also claims that he was fired from his job after complaining to his human resources director - who happens to be married to the man who plays Bailey.

Griffin says that while riding on an elevator at Staples on Dec. 8, 2016, the costumed Bailey put a hand on one of his shoulders and with the other hand squeezed his buttocks.

He is suing Tim Smith, the man who plays Bailey and who was allegedly in the mascot costume at the time.

Smith is married to Melissa Smith, the human resources director for Levy Restaurants.

The suit says Griffin complained the next day to Melissa Smith, but she became angry. He says he was later taken off the schedule and then fired during a meeting with Melissa Smith on Dec. 21.

The suit also says Griffin's coworkers made fun of him after the incident, with comments such as asking "Was his hand furry?"

The Kings issued a statement disputing the lawsuit's claims, saying they were investigated and found to be "without any merit."

"We are aware of the lawsuit filed by Mr. Griffin against AEG, Levy Restaurants, Compass Group and Tim Smith," said Michael Altieri, senior vice president of communications and broadcasting for AEG Sports and the Kings. "The allegations which are the subject of that lawsuit were thoroughly investigated nearly a year ago when they were first raised by this plaintiff."

"Those allegations were then - just as they are now - without any merit. Mr. Smith is an active figure in this community and a positive representative of our organization. We will vigorously defend ourselves in this matter."