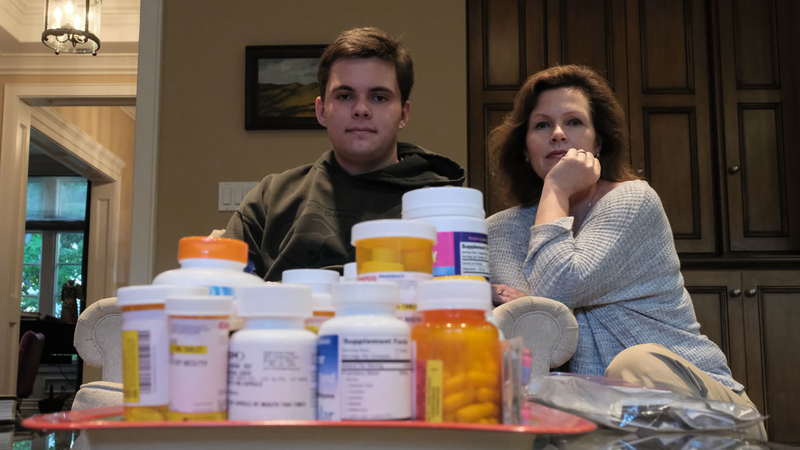 LOS ALTOS, Calif. (KGO) -- May is National Lyme Disease Awareness Month, and in California, that means a push to make not only victims but doctors more aware.

The state reports roughly 100 cases per year, but in reality -- doctors miss many times more due to confusing symptoms.

At age 18, Louis Sheridan is so familiar with his modern medications that you might think he has a degree in pharmacology. But he knows them for all the wrong reasons.

"I got mono, walking pneumonia twice, stomach flu, a bunch of colds," he said.

Such are a few of the diabolically deceptive symptoms of Lyme Disease. Sheridan's mother Kathleen O'Rourke has it too, after going undiagnosed for years.

"You either sound like a hypochondriac, or you sound like you need to go to a specialist for all those things," O'Rourke told ABC7 News.

Lyme comes from ticks. The spring grass is full of them, even in California where most of us recognize those tell-tale bites with a target around them but not the more subversive symptoms. That's where Wendy Adams comes in.

"We want to make Lyme Disease easy to diagnose, and simple to cure," she said.

Adams' Bay Area Lyme Foundation is now partnering with medical groups in California and around the country to create a biobank of different strains from across the U.S.

"Only 20 percent of researchers have the material they need to do research into Lyme Disease," Adams continued.

If you have a tick bite, the foundation may ask you to volunteer a few more vials of blood when being diagnosed.

"We're getting the same amount of funding as Leprosy," said Adams.

O'Rourke says she picked up the disease while gardening. Nine years later, she still suffers from chronic symptoms.

"I never saw a tick on myself though," O'Rourke said. "I never did."

Sheridan has had it twice. The first time, from a tick on his dog, the second while camping.

The disease has slowed him down so much that high school has taken five years instead of four.

In California, there are thousands of stories just like his.