Serena Williams is known for her tennis court heroics, but now she's being hailed a hero for a different reason -- chasing down a man accused of stealing her cellphone while she was eating at San Francisco's Mission Chinese restaurant.

SAN FRANCISCO (KGO) -- Serena Williams is known for her tennis court heroics, but now she's being hailed a hero for a different reason.

ABC News has exclusive video of Williams jumping into action after a man allegedly tried to steal her cellphone while she was eating at Mission Chinese in San Francisco.

In the video, Williams made a beeline out of the restaurant in the Mission District and what happened next has some calling her super Serena. "I had no idea who she was when she walked in," Mission Chinese waitress Anastasia Villanueva said.

Villanueva had no idea Williams was inside the dimly lit Mission Chinese restaurant. Superstar Williams and a guest were ordering forbidden fried rice, sour chili chicken, squid ink noodles and pork belly, but she did notice when Williams abruptly left. "Everybody knew that she was following this guy," Villanueva said.

"I kind of thought she was sick or something and ran outside, I didn't know what was going on," sous chef Steven Julius said.

The 34-year-old chased down a man who allegedly stole her phone. It all started when the 21-time Grand Slam winner was enjoying a meal and suddenly spotted a man standing too close to her table.

Surveillance video shows the man swiping her phone off the chair next to her. As soon as she noticed, Williams leaped up and chased after him.

The people in the restaurant were shocked. "She said that she thought that was the best approach, so that she could avoid any conflict with him and I just said, 'good job,"' Villanueva said.

Outside the restaurant, Williams confronted the man asking if he mistakenly took the wrong phone. She said he sheepishly admitted he picked it up because it was "so confusing" in the restaurant.

Williams posted the whole ordeal on Facebook and gave her 3.8 million followers some advice saying: "Always listen to your superhero inner voice. Just because you are a lady don't be afraid to step up to any challenge and not be a victim, but a hero."

That message of empowerment is spreading far and wide, with her Facebook post being shared at least 12,000 times. 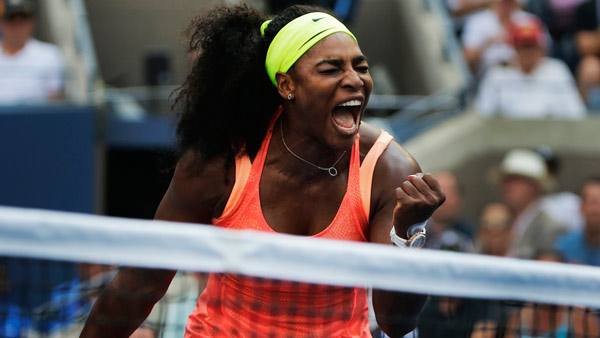