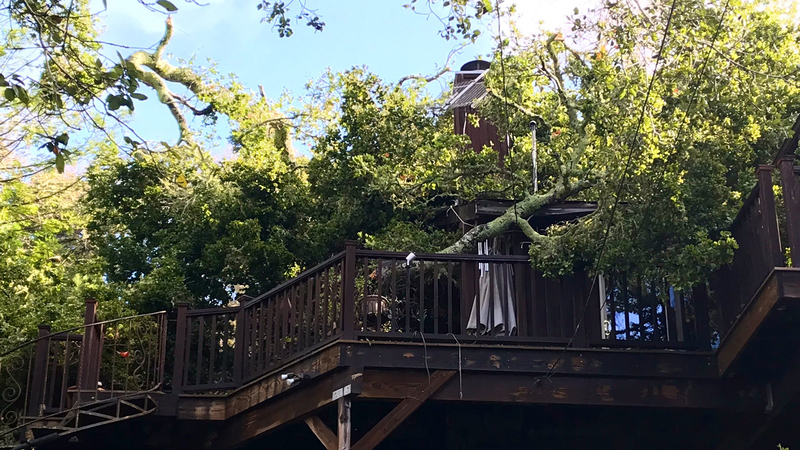 According to Cal Fire, the huge oak tree crashed into the living room. From the nearby driveway, it appears to have impacted part of the kitchen as well.

The house is located in a hillside neighborhood with lots of large trees and small lane roads, but the damage was limited to just the one house.

Massive oak #tree fell onto this house on Ferndale Way in #RedwoodCity.#CalFire says tree crashed into living room. #House is on a hill, tree was behind the house. It seems to have impacted part of #kitchen as well.#rain #wetweather #weather #BayArea pic.twitter.com/oHV5QT3iW4

"Fortunately, in this instance, nobody was injured, but his house was severely damaged and probably not livable right now," explains Cecile Juliette, with Cal Fire.

The homeowner spent the morning investigating the property. He wouldn't speak on camera but did say that the house was red-tagged and that he won't be allowed back until the tree is completely removed and a tarp covers the hole in the roof. The homeowner told Cal Fire that he recently had the tree trimmed.

One tree expert says big trees falling is an on-going problem throughout the Bay Area. The roots are weak because of the drought. The tree fills with water from the rain, which also saturates and loosen the soil. The wind, or even just the weight of the tree, can knock it down.

"The root ball is obviously very muddy because of all the rain that we've had for... the last month. So, the tree obviously fell over because of its own weight," says Juliette.

2- Homeowner spent the morning investigating his property. He says no one was injured. House red-tagged. He won’t be allowed back in until #tree is removed and tarp covers the hole. He says tree recently trimmed.#rain #wetweather #BayArea pic.twitter.com/xhfogmIuyO

Jill Biegenzahn and her family have lived on this street since 1990. The crash has them taking a look around their yard to see what needs to be done.

"There is absolutely work that needs to be done, I'd say on the whole street!" Says Bieganzahn. "We were so concerned about fires, for obvious reasons, that we hadn't really thought about this. Then after the rains came, I thought, 'Well there is no fire risk at the moment.' But now I see other risks."

Cal Fire suggests to have your trees trimmed and to call an expert to come out for an inspection, especially if you have older trees, which could be diseased.