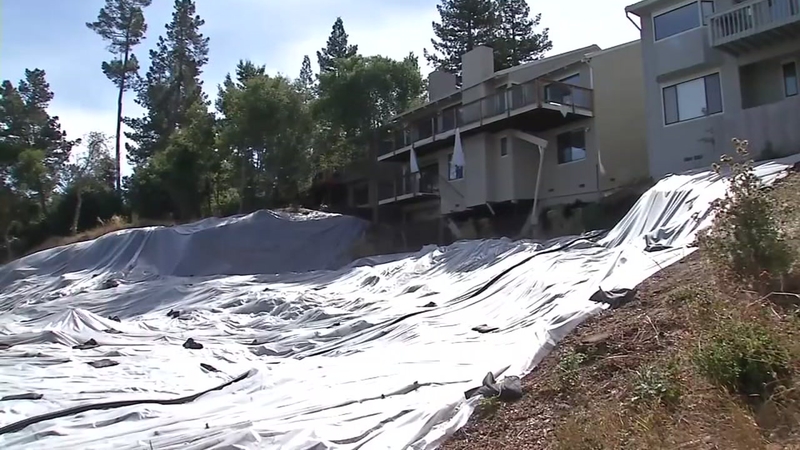 Back in March 2016, a huge landslide caused two homes to be red-tagged and damaged a third property. The homeowners have maintained all along that the utility is at fault but EBMUD claims the slide was due to circumstances out of their control.

In the meantime, two families remain out of their damaged homes and the hillside continues to slide.

"Looks pretty bad to me...looks terrible," said one of those homeowners, Tim Alford as he looked over the plastic-covered abyss that was once the back of his property.

It's like time stood still for Moraga homeowner Alford, at least that's how it looks at his red-tagged home on Moraga Way, one of three seriously damaged by a landslide more than three years ago. All but the property immediately adjacent to the homes is owned by EBMUD.

The saga for Alford and Martel actual began two months before their homes were damaged, in January of 2016, when there was a smaller slide adjacent to the creek below their homes.

"The creek down here established a slide in January of 2016," said attorney Bill Weisberg, who represents Alford and Dennis Martel, the two homeowners whose homes were red-tagged more than three years ago.

Weisberg says a key piece of evidence in the case will be an outside engineer's report and internal EBMUD emails that indicate the utility was aware that the hillside was susceptible to a catostrophic failure--two months prior to the larger March 2016 incident.

ABC7 News obtained a copy of the consultant's report from a company called GEI from January 2016. In it, an engineer writes "the toe of the landslide is being actively undercut by Moraga Creek" and "Additional and potentially more significant movements could occur if the landslide is not stabilized."

Internal emails from EBMUD also indicate concern within the utility, one engineer writing:

"...we suggest that the landslide be repaired. There are residences upslope of this landslide area."

"It shows that EBMUD, though their internal engineering department by email suggested stabilizing this hillside did nothing until it was too late," explained Weisberg.

And there was never any warning to the homeowners.

"What's really frightening is my neighbor's lower floor is like this, they had three children sleeping on that floor and they weren't even issued a safety alert. To me that's unconscionable," said Martel. He and his wife have moved four times in the last three years to various rental properties in the Moraga area.

EBMUD provided only a written statement to ABC7News: "The Moraga landslide is in litigation, with an upcoming trial date. We trust in the legal process and hope for a fair resolution."