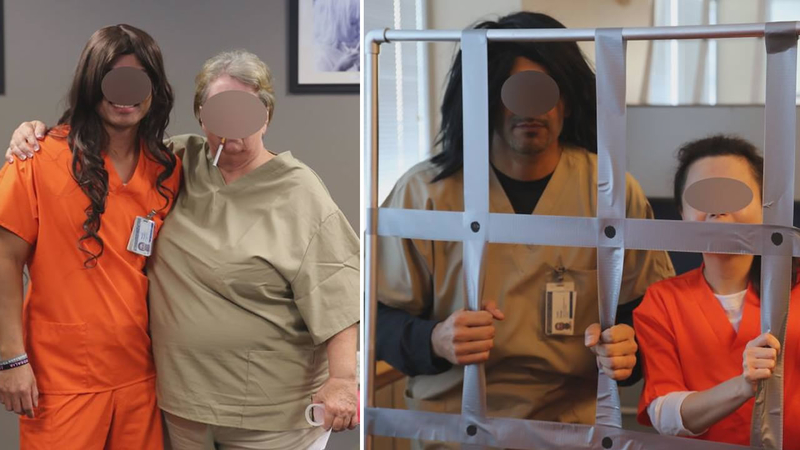 SACRAMENTO, Calif. (KGO) -- Furious reaction, after the I-Team showed you these pictures of California court system employees at an office party dressed up like prisoners. Judges around the state and lawmakers are reacting to our report, and the courts' oversight body is apologizing.

The reaction has been swift, after our report was emailed to every sitting judge in the state.

The NAACP is demanding an apology from the Judicial Council, the policy-making body for California courts.

She is shocked by what the I-Team uncovered Tuesday, saying, "That is not anything any judge I know would ever tolerate ever "

Dan Noyes obtained photos of last year's Halloween party at the Judicial Council, the policy-making body for California courts, whose goal is "access, fairness and diversity". But staff at the Sacramento office imitated the TV show "Orange is the New Black" -- turning their cubicles into prison cells, a guard standing watch, someone wearing dreadlocks and a Hannibal Lecter mask in a padded cell, others painting their faces, one male employee appearing to imitate a transgender actress on the show.

The Alliance of California Judges emailed the I-Team investigation to every sitting judge in the state, and called for "accountability and transparency" for the Judicial Council, "this rudderless and bloated bureaucracy."


Judge Gilliard said, "There is nothing funny to be made of lives being destroyed by Crime either as a defendant or as a victim."

Rev. Amos Brown, president of the San Francisco Chapter of the NAACP, told the I-Team, "We will call for an apology."

In Tuesday's report, the I-Team showed the pictures to Reverend Amos Brown of the NAACP.

"They don't see these prisoners as being human beings," responded Rev. Brown. "They see it as being a fun thing."

And now, the Judicial Council is apologizing to the NAACP, issuing a statement calling the "staff Halloween costume contest ... insensitive and unacceptable." "Our employees should be held to a higher standard where even the appearance of bias or prejudice is not permissible."

Also today, the California Legislative Black Caucus is calling for an investigation of diversity in the Judicial Council, saying "the racist actions ... are shameful."

And the California Capitol Black Staff Association is "horrified by (the) racist photos" calling them "hate speech that depicts dangerous stereotypes that have haunted the Black population in America since slavery."

In an email to employees, the Judicial Council tried to explain away at least part of the controversy, saying the staff did not actually darken their faces. But that only stirred up even more angry reaction at the state capitol.