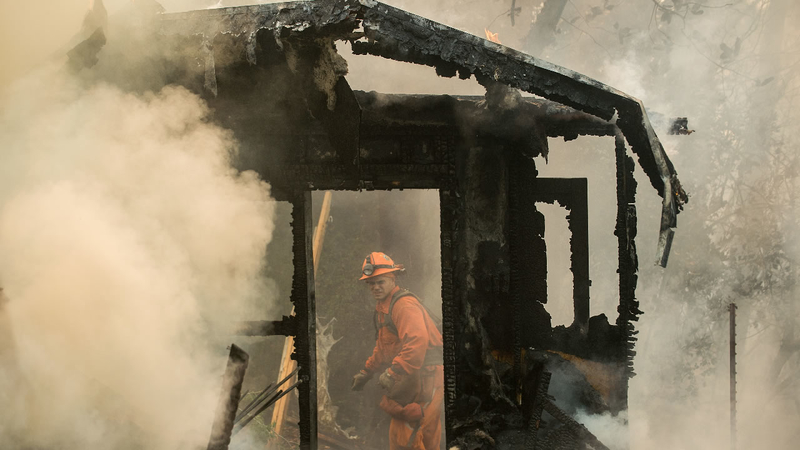 LOS GATOS, Calif. (KGO) -- The ABC7 I-Team has identified the owner of the property where the Loma Fire started. While Cal-Fire investigates the cause, we also have new details of a marijuana grower being called a hero for saving his neighbors and their pets, while his own possessions burned.

The Loma Fire destroyed a dozen homes and scorched 4,500 acres. Volunteer firefighter Jenna Garner-Smith launched Facebook Live as the Loma Fire reached her own property, and told friends, "The cottage is rubble, so I'm going to get in the car now 'cause I got a ride with a fire truck to get me off this mountain."

She returned the next morning, surprised to see the main house still standing.

"So we're blessed, we have our house," Garner-Smith said. "We've got neighbors that are right there that lost everything."


I-Team reporter Dan Noyes stood in the wreckage of one of the homes that burned right in the middle of the inferno and took power lines down. The flames were so hot that it melted metal.

Garner-Smith's elderly neighbor also lost his car collection. He kept every one he ever owned. She is crediting another neighbor, marijuana grower Yariv Dorr, for helping others escape while the fire destroyed his trailer home, his recording studio, and most of his crops.

Garner-Smith said, "He let his product burn in order to save fellow neighbors, animals and possibly children. He's a very good guy."

But, the week after the fire started, the sheriff's department arrested Dorr, confiscated plants estimated at a "minimum value of $850,000" and charged him with two felonies, cultivation of marijuana and possession for sale. He declined to be interviewed because of the pending case.

"I think he's being made an example of," said Garner-Smith. "And I think it's the wrong example."

Former Fire Chief Mary Ellen LePage added, "He was actually a great help during the start of the fire."

LePage: "They called Yariv to come over and help put out the fire. He got over there and said, 'No way, call 911.'"
Noyes: "It had already gotten beyond the point of just putting it out."
LePage: "It wasn't a little fire when he got there."

Where did the fire start? Noyes spoke with residents, growers, and one man who works in the marijuana industry.

Marijuana worker: "The locals know where it started."

Noyes: "Where?"
Marijuana worker: "Right at the grow-op that's right at the bottom of the hill right here."

Carlos Canche, UPS Driver, said, "I was in awe and shock more than anything."

Canche was driving his UPS route, when he pulled over and recorded the beginning of the blaze. He said on Facebook, "I got here before the firefighters."

The I-Team took a freeze frame from his video, highlighted two sticks, and was able to find the exact spot where Carlos parked.

Noyes shot his own video of the area, sent Sky7 overhead, and identified the plot of land. It's the same property neighbors complained to the I-Team about the month before. They even sent a Google Earth image. Those marijuana grow houses survived the fire.

At the time of the fire, Segal was also president of Green Acres medical marijuana dispensary in Santa Cruz. The operators of Green Acres said Segal offered to resign from the Green Acres board the day of the Loma Fire.

Andre Segal's attorney Mark Segal told the I-Team, "There is simply no evidence he did anything wrong."

His lawyer said Segal would not be interviewed, but he resigned from Green Acres so no one would connect the dispensary with the Loma Fire, and that he was leasing the property to someone else.

"Did the marijuana have anything to do with the fires, was it the source of the fire? The answer is no," Garver said.

Andre Segal hired a veteran fire investigator, who emailed Dan Noyes, "It would appear the fire started on the Segal property; however, I reserved the right to change my opinion should further information become available to me during my inquiry."

So, how did it start?

Mary Ellen LePage told the I-Team, "I was told by one of the firemen that were at the scene where it started that it was a cigarette."