KGO
By by Melanie Woodrow
OAKLAND, Calif. (KGO) -- A partial collapse at a building in Oakland Friday morning trapped between 15 to 20 construction workers, and at least 12 of them had to be taken to area hospitals for treatment.

The construction accident occurred in 3000 block of Broadway.

A spokesperson for Cal/OSHA told ABC7 News it conducted a complaint-based inspection there in March, but closed it without issuing any citations.

The nature of the complaint is confidential.

Cellphone video revealed the chaos moments after the partial collapse during a cement pour from the second floor. "I was on the third floor, I was walking that way and it just sunk in," a construction worker said.

As Oakland firefighters arrived, those co-workers also sprung into action, putting up a ladder and putting down pieces of plywood on the spilled wet cement, which was nearly impossible to move through. "It's kind of like quicksand," Oakland Fire Department Battalion Chief Ian McWhorter said.

Oakland fire officials said 15 to 20 construction workers initially were trapped, but everyone got out. "It was a great rescue between us and them," McWhorter said.

OPD assisting OFD with building collapse in 300 block Hawthorne. No fatalities; all accounted for. Injured persons transported to hospital. pic.twitter.com/2DSqJjo4zn

The general contractor on the project is Johnstone Moyer Construction. The subcontractor is Largo Concrete Incorporated.

Cal/OSHA is now investigating and speaking with workers and reviewing safety procedures. "Was this a situation in which this could have been prevented?" Cal/OSHA spokesman Peter Melton said.

Three resulted in violations for workplace safety hazards, including one serious violation for failing to guard reinforced steel, which could have resulted in a worker being impaled.

Click here with information on the safety record for Largo Construction, Inc. over the past five years.

Click here for details on the inspections where violations were found. 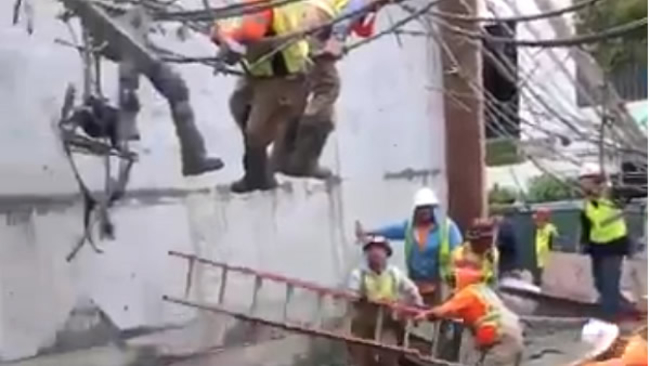