KGO
By by Leslie Brinkley
SANTA CLARA, Calif. (KGO) -- Dueling protests were held Saturday at a busy intersection in Santa Clara as anti-Sharia law activists turned out as well as those who accused the group of being anti-Muslim.

"I think the stand here is Sharia law is not compatible with the constitution and we believe in many places it's starting to creep in," anti-Sharia activist Donald James said.

"A lot of Muslims follow Sharia law and that's a scary thing for Americans because our rule of law is the U.S. Constitution," anti-Sharia activist Georgine Scott-Codiga said.

Plenty of police and crowded sidewalks near Santana Row for dueling protests. But all peaceful. #abc7news pic.twitter.com/3nYgQvEHC9

The activists cited everything from female mutilation to recent terrorist attacks. They were organized by Act for America and stood their ground on the busy street corner across from the Santana Row shopping area.

Across the honking traffic were many who interpreted the message from a different angle. "I mean it's really clear that even though they're hiding as anti-sharia these are actually anti-Muslim protests. This is very antagonistic," U.C. Santa Cruz student Sabina said.

"Just like Jews were targeted in the past, our civil rights are being questioned and we are standing together in solidarity to fight that sentiment," Aisha Piracha with Muslim-Jewish Solidarity Alliance said.

Bay Area civil rights and faith groups organized the counter protest. They came from as far as San Francisco and Santa Cruz.

"It's amazing to see so many people come out in the name of unity as opposed to standing against one religious tradition," Spojmie Nasiri with the Council on Islamic American Relations said.

Sign-toting activists periodically walked across the street to infiltrate the other side for a while, but police kept them on the sidewalks and out of the lanes of traffic. In the end it was disruptive but peaceful.
Report a correction or typo
Related topics:
san josesanta claraprotestmuslimswhite supremacistsanti semitismracismpeace marchpoliticsrally
Copyright © 2020 KGO-TV. All Rights Reserved.
RELATED 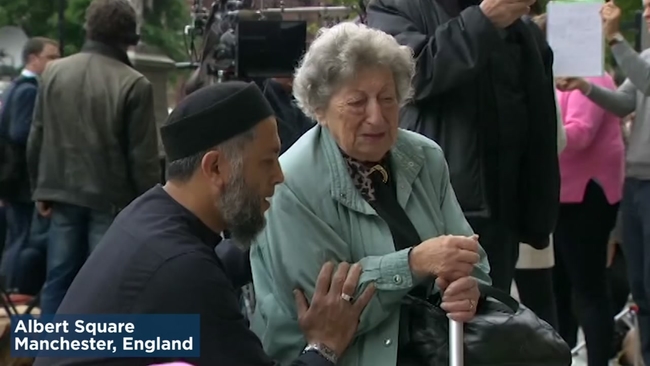