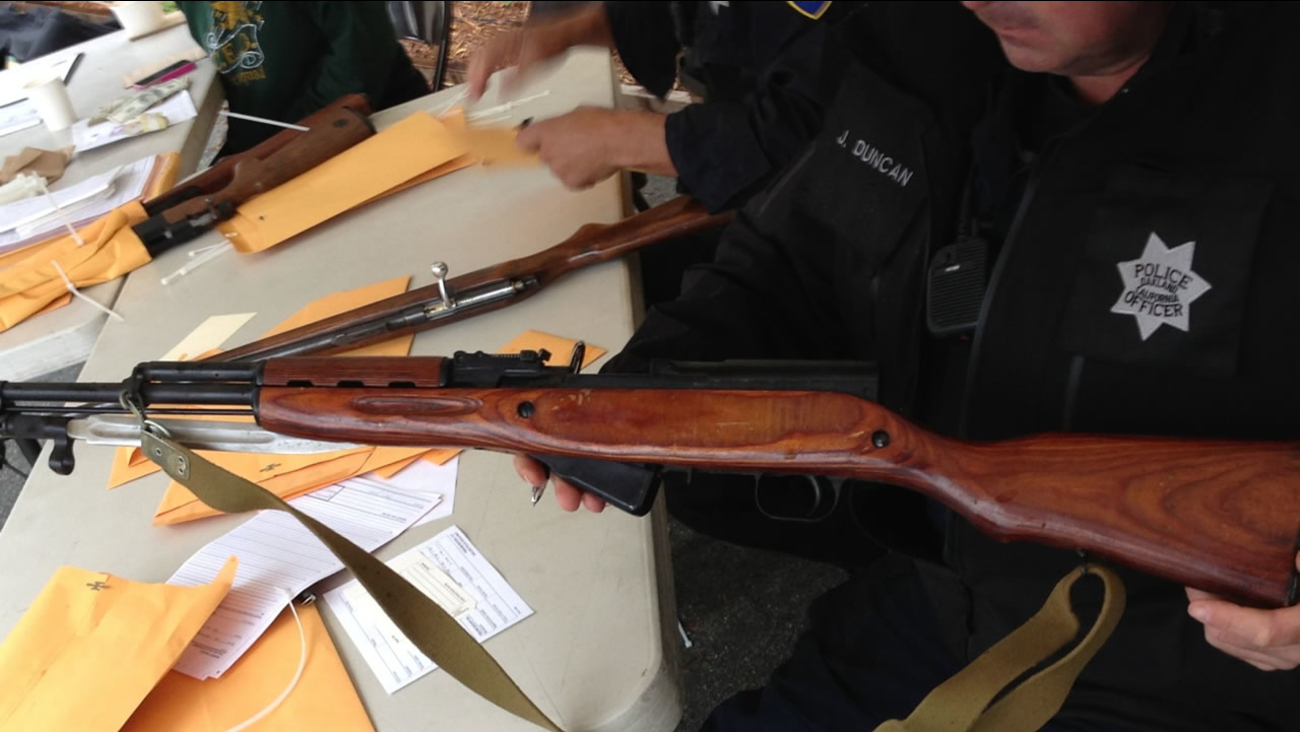 A photo provided by the Oakland POlice Department shows weapons taken off the streets in a buy-back program in Oakland and San Francisco, Calif., Saturday, Dec. 15, 2012.

Bay City News
OAKLAND, Calif. -- Oakland residents who want to turn in any unnecessary or unneeded firearms for cash will have the opportunity to do so this Saturday.

Nonprofit group Youth UpRising will be holding a gun buyback event at its East Oakland office at 8711 MacArthur Blvd. from 9 a.m. to 3 p.m. Saturday.

People can receive up to $100 for handguns and standard rifles and up to $200 for automatic weapons and assault rifles.

The firearms must be in working condition, unloaded and inside the trunk of a car before it is turned in.

The annual event is in its third year that will be held simultaneously with gun buybacks in San Francisco, San Jose and Los Angeles, Youth UpRising spokesman Michael Hunt said.

Oakland police will be on hand at the event to check if the gun has been lost or stolen, in which case it will be returned to the owner, Hunt said.

All other firearms will eventually be destroyed, he said.

No one will be allowed to walk-in to the event with a gun and ammunition will not be accepted.

There were 147 guns turned in at last year's event.

Those who plan to attend Saturday's buyback must have proof that they live in Oakland by bringing in identification such as a driver's license, state ID card or cellphone bill.

Though the event is scheduled to end at 3 p.m., staff may wrap-up early if the funds run out before then.

The funds to be used in Saturday's event include leftover money from an online fundraising campaign last year on Crowdtilt, now known as Tilt, through a partnership with nonprofit organization Gun By Gun, in addition to donations made to Youth UpRising, Hunt said.

"We want to let everyone know that if you're strapped for cash this holiday season and have a firearm in your home you want to get rid of, we will take if off your hands, no questions asked," Youth UpRising President and CEO Olis Simmons said in a statement.

Based on data received by Oakland police, gun buybacks have proven to be the most effective during the summer and holiday months, Hunt said.

Some guns may end up in the wrong hands such as situations where robbery victims have had their firearms stolen because they did not properly store their weapons, according to Hunt.

"The long-term goal is to not to solve crimes but to prevent future crimes," Hunt said.