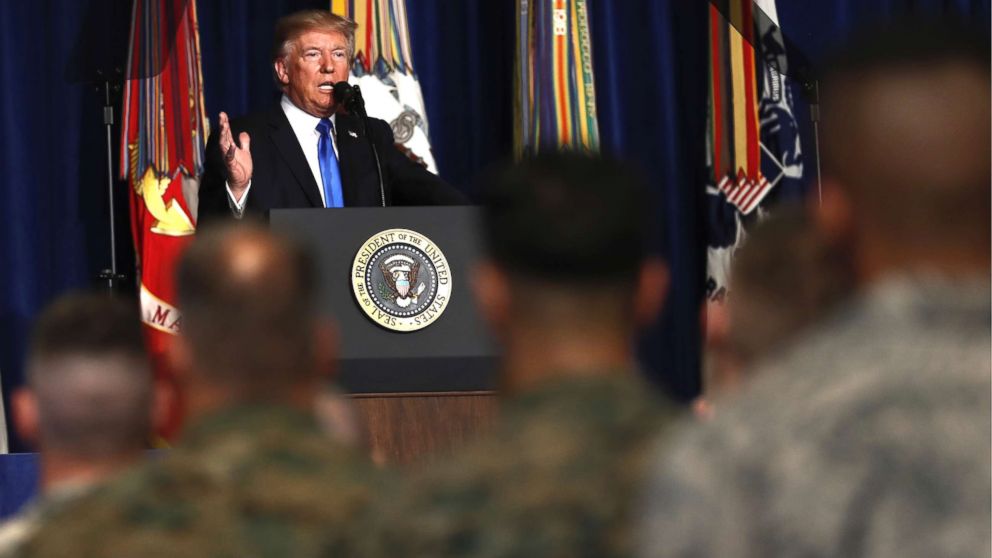 U.S. lawmakers were divided today on President Trump's plans to increase the presence of the U.S. military in Afghanistan, with the House speaker lauding "a new Trump strategy," for instance, while a fellow Republican in the Senate called it a "terrible idea."

Trump's announcement tonight was a reversal of the position he held prior to his bid for the presidency, but the addition of U.S. troops in Afghanistan comes as he has demonstrated a willingness to engage militarily in the region.

"My original instinct was to pull out, and historically I like following my instincts," Trump said this evening. "But all of my life I heard that decisions are much different when you sit behind the desk in the Oval Office."

Here's what some lawmakers and others had to say:

"I think I heard a new Trump strategy, or a doctrine so to speak," he said. "Principled realism is how I think he described it. So I think it's important when it comes to our blood and our treasure and our soldiers and our safety, that we actually have a comprehensive doctrine that we apply."

"I am confident of the path ahead, and will work with my colleagues to ensure our troops have the resources they need to succeed in their mission," he said. "This framework ... is the right thing to do for Afghanistan, the United States and the world."

Sen. John McCain, R-Ariz., called Trump's new strategy a "big step in the right direction," warning that it was "long overdue." He said it is important that "the newly announced strategy gives no timeline for withdrawal" and that it is based "on conditions on the ground."

"At the same time, Congress must meet its responsibilities for overseeing the war in Afghanistan and providing the necessary resources for it. The Senate Armed Services Committee will continue to meet its special obligations in this regard, beginning with a hearing on this...in September," McCain said in a statement.

Senate Majority Leader Mitch McConnell, R-Ky., commended the president and his national security team for a thoughtful review of Afghanistan.

"Despite all of our efforts, and the unmistakable sacrifice and valor of our forces, we remain threatened by terrorists, as last week's attacks in Spain reminded us all. Maintaining forces in Iraq and Afghanistan protects America's national security interests," McConnell said in a statement.

McConnell added, "Our overseas presence should not be guided by arbitrary withdrawal deadlines. The Taliban will never agree to a political settlement in Afghanistan if a date for our drawdown has been handed to them."

Hamdullah Mohib, Afghanistan's ambassador to the United States, welcomed Trump's decision for a strong Afghanistan-U.S. partnership, noting the hope that it would lead to a "peaceful and enduring outcome."

Marco Rubio, R-Fla., who has criticized Trump previously, tweeted that the strategy was "very good," saying it was "put together the right way" with "careful review and consideration of multiple views and ideas."

Rubio also denounced those who attacked Trump for changing his stance since his campaign.

Sen. Bob Corker, chairman of the Senate Foreign Relations Committee, R-Tenn., said that he believed Trump's "more focused plan" lends flexibility to the U.S. military and that the new approach would result in "better diplomatic outcomes" with regional partners, particularly India and Pakistan.

Corker also noted that there remains substantial questions on whether Afghanistan has the "capacity over time to provide stable governance" to its people.

"The mission in Afghanistan has lost its purpose, and I think it is a terrible idea to send any more troops into that war," said Sen. Rand Paul, R-Ky., whose office intends to introduce a measure in September to repeal the laws that authorize military forces against ISIS.

Minority Leader Nancy Pelosi, D-Calif., slammed Trump's agenda, saying the lack of details on troop numbers and no timeline represents an "open-ended commitment of American lives with no accountability to the American people."

"The American people need to know more about the President's plans and conditions. To what extent is there a comprehensive strategy including an exit strategy for finally bringing America's heroes home?" Pelosi said in a statement.

"The State Department is understaffed and underutilized and President Trump wants to slash its budget and foreign aid further ... It is imperative for the U.S. to work with our partners to boost diplomacy ... and take a comprehensive, regional approach in Afghanistan," he said.

Reed also said Trump's criticism of Pakistan "seemed to ratchet up tensions between Pakistan and India," which could play a negative role in stabilizing the region.

Sen. Kirsten Gillibrand, D-N.Y., took a harsher stance against the president on Twitter, saying it would be a "disservice" to send more troops until the president can prove what success in Afghanistan might look like.

She will be calling for hearings in the Senate to ensure the Trump administration is held accountable for its actions, she added.