KGO
By by Leslie Brinkley
OAKLAND, Calif. (KGO) -- A ferocious four-alarm fire broke out at an Oakland apartment complex under construction on Valdez Street just off Broadway. The fire broke out around 4:30 a.m. and hundreds of neighbors had to evacuate.

Several officials said that the big question on everyone's mind is was this arson? There have been four construction site fires in the last year in the Oakland-Emeryville area, two of them arson, one of them highly suspicious. And now this.

At 4:30 a.m., the under construction building in Uptown Oakland suddenly mushroomed into an enormous, ferocious fire.

The four-alarm blaze forced responders to take a defensive stance because the crane took on heat, which caused it to spin wildly.

The scaffolding collapsed into the street below, prompting urgent evacuations at nearby buildings.


"We're not saying that it's suspicious. What we're merely doing is asking anyone that may have information that could be helpful for us to come forward and share that information," Oakland Fire Dept. Interim Chief Darin White said.

Federal and local arson investigators are on the ground, looking into first responder reports that the fire billowed outward from the center of the building.

Ladder trucks are still attacking the blaze from all angles -- ash, soot and smoke still coming from the center.

"We know that two recent fires on the Emeryville-Oakland border were confirmed as arson and that is incredibly disconcerting to us," said Mayor Libby Schaaf. "We are bringing all resources to investigate this incident and we also will be working to beef up our prevention efforts around any type of illegal activity or arson that might be a threat."

Officials are saying it's miraculous there's no deaths or injuries. A drone is being used to inspect the base of the crane and help officials come up with a plan to safely take it apart.

After eight months of construction, the Alta Waverly building would have soon provided 196 market-rate apartments and 31,000 square feet of retail space.

Now it's all gone, according to the mayor, exacerbating Oakland's housing crisis.

All people and pets accounted for in Oakland fire. Next: dismantling dangerous crane. #abc7news pic.twitter.com/RYeLgL06En

Evacuees living near Oakland fire escorted by police to their homes to grab belongings, they cannot stay tonight. pic.twitter.com/n1yebEIMgQ 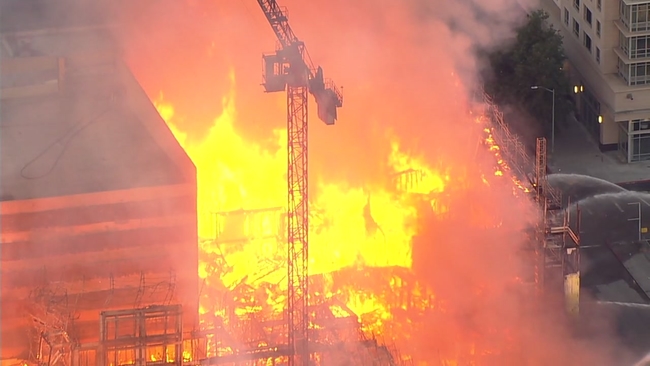