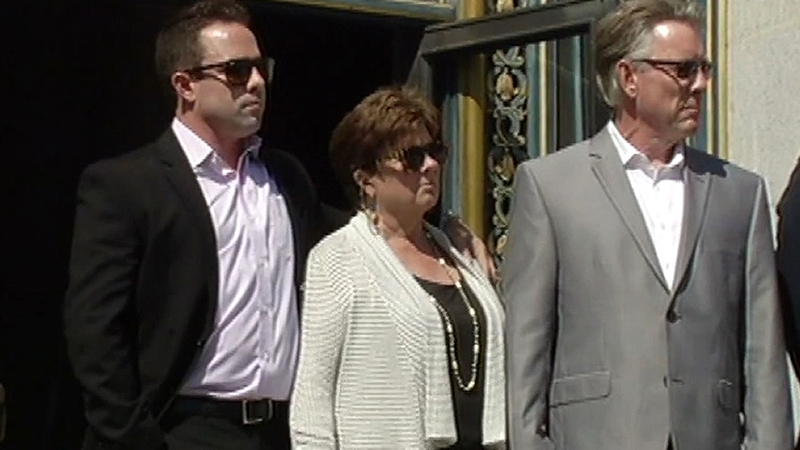 SAN FRANCISCO (KGO) -- The family of Kate Steinle, who was fatally shot on San Francisco's Pier 14 in July, filed wrongful death claims on Tuesday against San Francisco Sheriff Ross Mirkarimi, Immigration and Customs Enforcement, or ICE, and the U.S. Bureau of Land Management, or BLM.

Steinle's family gathered with attorney Frank Pitre on the steps of San Francisco City Hall Tuesday morning to announce the legal claims, which are often precursors to lawsuits. "The message that they send by filing three claims today will assure that this never happens again," Pitre said.

"Nobody has taken responsibility and nothing has changed." Father of SF shooting victim #KateSteinle at news conference announcing lawsuit.

Late Tuesday afternoon, the Steinle family walked onto Pier 14 to the place where she was killed. "And I know that she's proud of what we're doing. We just want to make her proud," Liz Sullivan said.

Kate's mother is referring to the legal action they took.

"We're frustrated," Brad Steinle, Kate's brother, said at the family news conference. "We're here to make sure that a change is made so nobody has to endure the pain that my mom and dad and I go through on a daily basis." He went to say that, "the system failed our sister" and that, "At this point, nobody has taken responsibility, accountability. And nothing has changed."

Officials said Steinle was walking on Pier 14 with her father on July 1 when she was shot dead. "As she fell, she said 'help me dad,'" Jim Steinle said.

But unfortunately he could do nothing to help his daughter. She lay dying in her father's arms and two months later the Steinle family fulfilled Kate's last wish by taking legal action against those they believe should be held accountable for her death.

Within an hour of the shooting, police arrested Juan Francisco Lopez-Sanchez, an undocumented immigrant who had been deported five times and has seven prior felony convictions. Lopez-Sanchez pleaded not guilty to murder, according to court records.

The case gained national attention and has been spotlighted in the immigration debate and the 2016 presidential race.

The Steinle family blames the officials who released the suspect from jail prior to the July shooting. Pitre said San Francisco Sheriff Ross Mirkarimi "made himself the king, judge and jury" when it came to the city's cooperation with federal authorities.

"Who in their right mind would let a seven-year felon, undocumented, violent felon loose on the streets where you people are now standing," Jim said.

Officials say Mirkarimi had ordered his deputies not to notify ICE on possible deportation detainees except in rare situations.

The second claim is against ICE, the agency that enforces immigration laws. The family claims the agency knew about Mirkarimi's policies and yet did nothing to retrieve Sanchez.

The third target in the legal action is the Federal Bureau of Land Management. The gun Lopez-Sanchez used is similar to the one that was stolen from the parked car of a BLM agent. "If that weapon wasn't there, if it was secured properly, this wouldn't have happened," Brad said.

The sheriff, ICE and the Bureau of Land Management said they could not respond to the legal action, but extended their sympathies to the Steinle family.

San Francisco Mayor Ed Lee is talking about what led up to the deadly shooting. Lee seemed to back up the Steinle family's claim that law enforcement agencies are to blame for releasing the Lopez-Sanchez from custody.

He said the problem was a lack of communication. "You cannot have good communication if an agency single-handedly decides not to communicate. That is wrong and we need to correct that," he said.

She opposes "Kate's Law" a proposal in congress inspired by the shooting that would punish sanctuary cities. "This horrific crime, and terrible as it is, is not a reflection of what sanctuary cities were established to do. What they have accomplished," Pelosi said.

Pelosi says congress should instead approve immigration reform to normalize the status of those in the United States illegally.

Steinle's family and coworkers have set up online fundraising pages to raise money for charities that were important to her. Click here for details on her family's page and click here for information on her coworkers' page.
Related topics:
san franciscopier 14 shootingsfpdross mirkarimipoliceimmigration reformcrimearrestwoman shotmurdercourthomicide investigationcourt casehomicideshootingwoman killedlawsuitu.s. & worlddeportationiceinvestigationimmigrationguns
Copyright © 2021 KGO-TV. All Rights Reserved.
RELATED 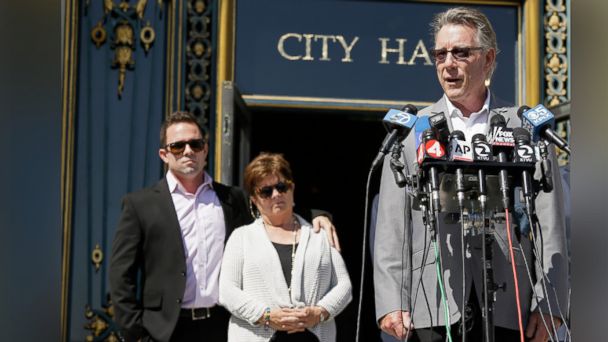