Bay City News
BERKELEY, Calif. -- Police at the University of California at Berkeley placed the campus on lockdown and ordered students to leave the area amid a tense protest at a planned speaking event by controversial far-right writer and speaker Milo Yiannopoulos Wednesday evening.

A shelter-in-place order was been issued for the area due to the protest, which police described as a "dangerous situation." They announced a dispersal order on Twitter at 6:45 p.m., but as of 6:55 p.m. there were few officers on the plaza to enforce it.

Around 7:20 p.m. officers issued a 10-minute warning, threatening to use less-lethal weapons including chemical agents and batons if the crowd failed to disperse.

An attendee at the event was hit with a pole by protesters. He was hiding a Make America Great Again hat under his hood, according to a witness who asked to have his name withheld.

When the victim revealed the hat, he was knocked to the ground. Other protesters attempted to strike him while he was down, according to the witness. Police watching from a balcony above observed the situation and came down to help him out of the crowd.

After the attack, blood was seen on the ground in the plaza.

At least one pyrotechnic device was thrown at police by the demonstrators earlier this evening. It exploded near one of the officers, according to UC Berkeley student Russell Bierle.

The event barricades were breached and used to smash the windows of the campus bookstore, where the entrance to the event was located. A large fire has been burning in front of the building. It briefly spread to a nearby tree.

The barricades directly in front of the bookstore were dismantled by protesters in masks. Many from the crowd gathered on the bookstore's steps.

Hundreds of protesters were observed at this evening's event. Over 2,100 people responded to a Facebook post that they would be attending.

Due to violent demonstration, additional resources are being brought in. Cal students should leave the area immediately. #miloatcal

Multiple dispersal orders have been given for the Milo protest. Please leave campus or avoid the area. @UCBerkeley #miloatcal

UCPD has issued a stay away in or near Bancroft and Telegraph due to major protest attacks. https://t.co/XxBWL3OaeZ #miloatcal 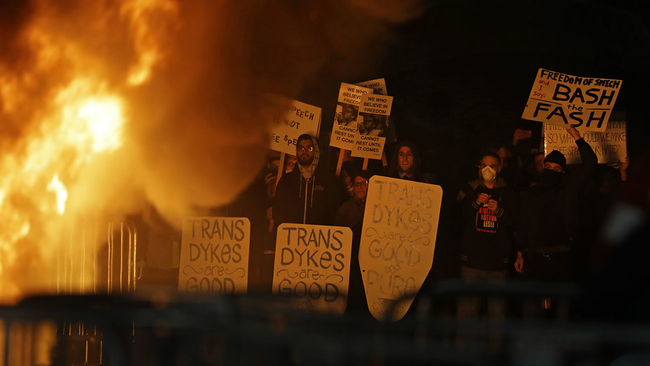 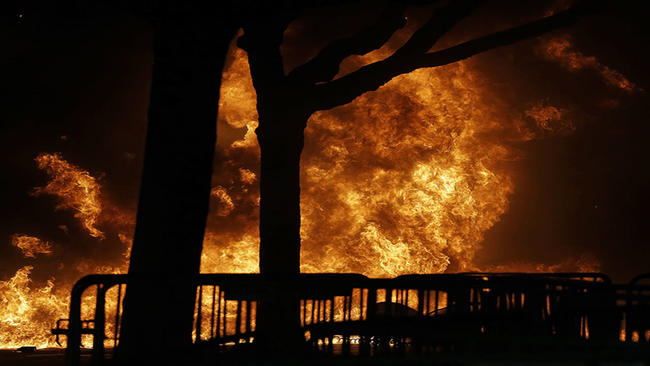