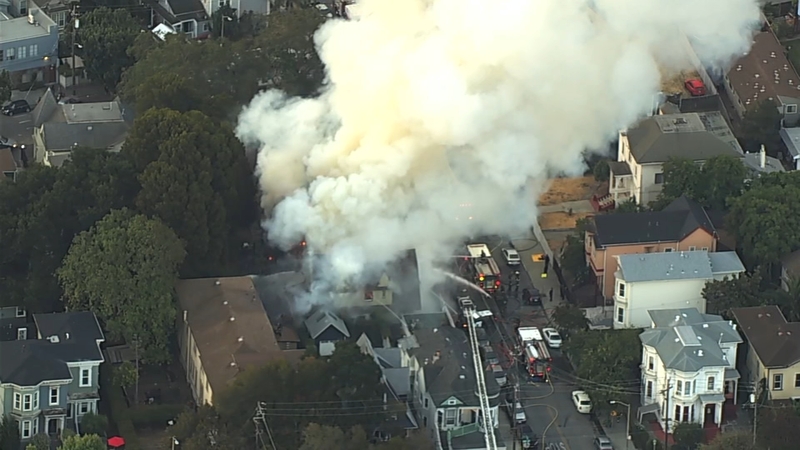 The fire started around 5:30 a.m. on 9th Street between Peralta and Chester Streets, near the West Oakland Bart Station.

The 3Alarm incident in the 1500 block of 9th St has been placed UNDER CONTROL at 905AM. Crews remain on scene to mitigate any hot spots and overhaul the two adjacent structures next to where the fire started early this morning. pic.twitter.com/D2uORsS7pV

Residents say it started in a vacant home that has been taken over by a squatter. They believe he had a fire burning and fell asleep. They say they have called police for help.

"I have called multiple times, at least 4 times, to please remove the man from the location and Oakland PD has not responded," Kwame Grant said, while standing outside police caution tape in his bathrobe, looking at his burned home.

"This all could have been avoided if they literally did their job in the first place by coming and stopping the homeless man from being in the house," he continued.

Firefighters say it was a very dangerous situation. They evacuated the entire block of 9th Street between Peralta and Chester.

Just as the Bay Area gets ready for a Red Flag Warning and possible dry lightning, a fire station in Oakland had to shut down this weekend.

"They definitely saved this entire block from burning down. They did a wonderful job containing it. They had a lot of fire when they arrived. They had a lot of difficult situations, power lines were down," Batt. Chief Ryan Meineke said.

No one was hurt, but the five people living in one home and the three who lived in the other are now dealing with losing their homes and belongings.

Kwame Grant also had questions for the fire department.

"It took them 20 minutes to start fighting the fire so I don't understand why that happened. They said they needed more water but don't we pay water bills so there is water in these situations? So I am really upset and don't understand."

The fire department explained that it takes a bit of time to get all the hose together for a coordinated attack.

RELATED: Victorian house in Oakland hits market for free, but there's a catch

"It takes a second to get other adjoining engine companies to grab water from this corner and that corner (hydrants) and grab multiple hose lines to have enough water for all of the buildings that are on fire," Batt. Chief Meineke said.

"I understand what it must feel like, especially if it is your home," he said.

Oakland Police Department Spokesperson Johnna Watson said there have been three police-related calls at the home where the fire started, including a stolen vehicle case in 2021, a trespassing case in 2020 and a disturbance call in 2019.
Watson said the home was vacant for two years before being sold approximately 30 days ago.

The fire department says the fire's cause is under investigation.