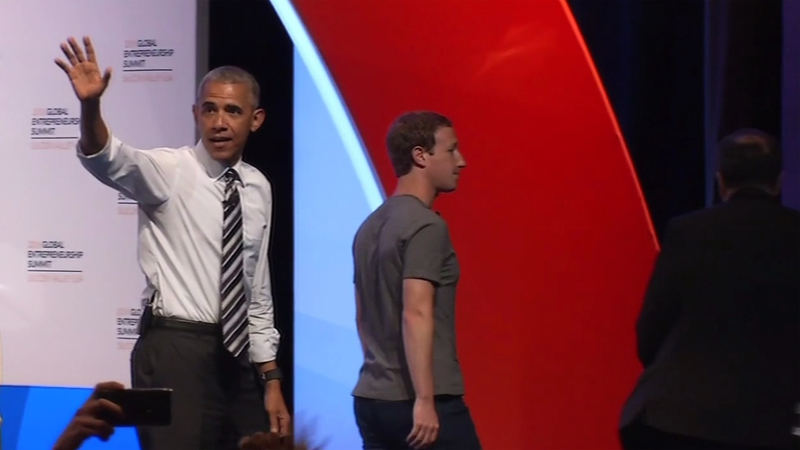 STANFORD, Calif. (KGO) -- President Obama made a stop at Stanford University on Friday to share some words of wisdom to those who were attending the Global Entrepreneurship Summit.

Many are calling it a once-in-a-lifetime opportunity as young business leaders from around the world coming together to share their ideas for a better future.

"To do the networking, to have that feedback that will allow us to keep on going with our ideas, to keep on doing the things that everybody tries to tell us that are impossible," said Gary Urteaga, an entrepreneur.

#POTUS + @facebook's Mark Zuckerberg speaking on a panel with global entrepreneurs who are making a difference. #GES pic.twitter.com/1XbZrBgLeI

Presented by the State Department, Stanford University played host to this year's Global Entrepreneurship Summit with over 700 entrepreneurs and 300 investors gathered for the final day.

"We gotta make sure that all of our young people around the world, have the tools they need to start new ventures, and create the jobs of the 21st century," said President Obama.

Obama was joined by Facebook CEO Mark Zuckerberg for a panel discussion with social entrepreneurs, who are making a difference in their communities.

"To me, entrepreneurship is about creating change, not just creating companies," said Zuckerberg.

And while the conversation was serious, there were moments of laughter as the cast of HBO Silicon Valley paid a visit.

Stanford alum Daniel Lubetsky is the founder and CEO of Kind Snacks. He was here to help mentor the next wave of entrepreneurs.

"Entrepreneurship can be one of the greatest tools for advancing American interests and ideals," said Daniel Lubetzky, with Kind Snacks.

The experience was not lost on those who came to learn.

"What I was struck by, is these are just regular people, very smart people, very successful people, but you can kind of see the humanity in them, which was inspiring," said Justin Jaffe, an entrepreneur.

Next year's summit will be in India.

#POTUS briefly talks about #Brexit vote at the beginning of his remarks to #GES2016 attendees. #Stanford #PaloAlto pic.twitter.com/fnhnezWEUW

Crowd gives standing ovation to cast of @SiliconHBO. A lucky few got selfies, too. #POTUS appears in a little bit. pic.twitter.com/5lbvIjw01O