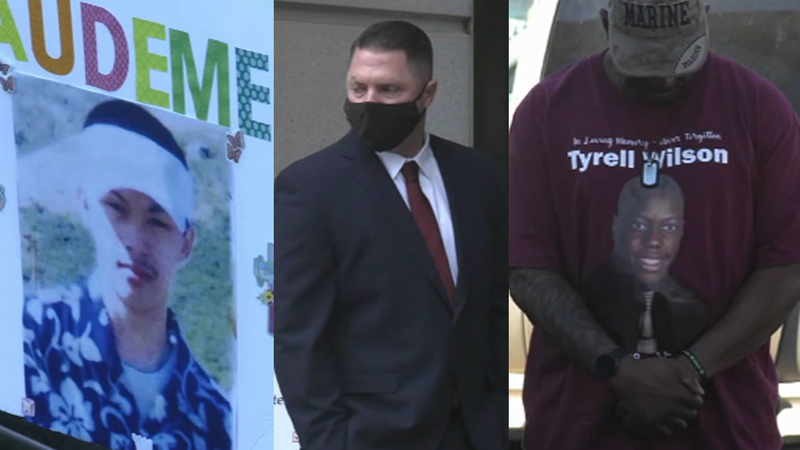 Hall, while on duty in Danville, shot and killed two men with known mental health conditions. He was sentenced Friday to six years in prison for the 2018 shooting death of Laudemer Arboleda.

Demonstrators now want him charged in the 2021 killing of Tyrell Wilson.

"It was senseless, it was unnecessary. Tyrell was not the aggressor, Hall was the aggressor in that situation," Marvin Wilson said outside the DA's office, on what would have been his son's 34th birthday.

In a video released by the county, Tyrell can be seen standing in a parking lot in Danville, then walking backward. Police say he was armed with a knife and refused to drop it when he was shot and killed.

Marvin Wilson says his son suffered from a brain injury after being involved in a car accident and has suffered from mental health episodes ever since.

"Having a mental health issue or crisis is not a crime," he said.

Tyrell Wilson's Uncle was also at the rally. He received one of Tyrell's kidneys after his death.

"Mental illness is something that needs to be addressed in this country. They need to give these cops training on how to handle people that have mental illness," Eddie Edwards said.

"I just want to thank you guys for coming out here to celebrate the life of Tyrell, my nephew."

ABC7 has learned that the same Danville police officer who shot a man this week, shot and killed a man while on duty in 2018.

Andrew Hall shot Wilson while on duty as an officer in Danville in March of 2021. He was under investigation at the time for shooting and killing Laudemer Arboleda in 2018, who also had known mental health conditions. Hall was sentenced for Arboleda's death, but the victim's mother spoke out at the rally to demand more.

"The six-year sentencing is not enough. I want the DA, Diana Becton, to retry the case of my son for involuntary manslaughter," Jeannie Atienza said.

Wilson's father is hoping to see charges filed in his son's case.

"I think he should face manslaughter and felony assault with a firearm."

He would also like to see these investigations happen at a swifter pace.

"If they would've acted faster...what I am saying is...Hall wouldn't have been able to kill my son, because he would've been off the street," said Wilson.

Marvin Wilson says he watched all of the videos and said the other officers on the scene acted appropriately. He is a retired sheriff's deputy.

"I did 31 years with the Orange County Sheriff's Department in Southern California. I felt like one of my own brothers killed my son. And it was my only son," Wilson said, choking up.

"There are good officers out there. All of them aren't bad. It's just trying to find out where the bad ones are."

Mothers of other men who have been shot and killed by police were also there to show support. Some, while calling for more to be done, also pointed to progress that has been made.

"Things are happening in the mental health space. We are seeing it. Now there is a pilot program in Contra Costa County- called the Miles Hall lifeline act. It happened because people like you have said 'No. Not in my county,'" said Taun Hall, whose son, Miles, was shot and killed by Walnut Creek Police in 2019.

"I just want to say, I am hopeful for change, and it is happening," she said.

ABC7 News reached out to the Contra Costa County District Attorney's office for comment and an update on the investigation into the shooting death of Tyrell Wilson. A spokesperson said the office had no comment.