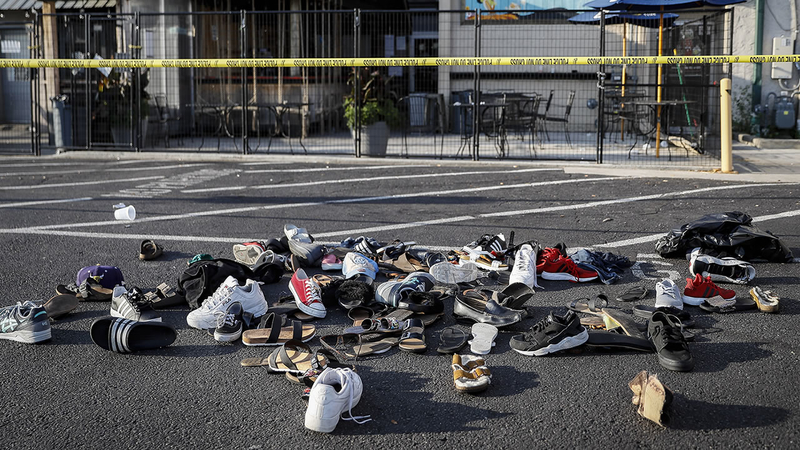 DAYTON, Ohio -- Authorities have identified the nine people killed in a shooting overnight outside a bar in the Oregon District of Dayton, Ohio:

Nicholas Cumer was a graduate student in Saint Francis University's master of cancer care program. Father Malachi Van Tassell, the school's president, said Cumer had been in Dayton as part of an internship program.

He described Cumer as dedicated to caring for others and said Cumer was among the students recognized for completing more than 100 hours of service. He also said Cumer was a graduate assistant with the university marching band.

A mass in Cumer's memory will be arranged on campus this week.

Lois Oglesby was a mother of two who had a newborn daughter, a relative said.

Derasha Merrett told the Dayton Daily News that she was a cousin and friend to 27-year-old Oglesby. Merrett says she was up feeding her own newborn early Sunday morning when she learned Oglesby died in the shooting.

She remembered Oglesby as a "wonderful mother, a wonderful person." Merrett said her cousin was in nursing school and looking forward to a career that would make the most of her love for children.

A native of East Africa who moved to the United States a few years ago, Ohio shooting victim Saeed Saleh was remembered as a "humble and quiet person" by a spokesman for his family.

Yahya Khamis, president of the Sudanese Community of Dayton, said Monday that he was speaking on behalf of Saleh's family and coordinating funeral plans for the 38-year-old. Khamis said he didn't know Saleh well but called him kindhearted.

"He was a very good guy," Khamis said.

A father of Saleh of three, Saleh was originally from Eritrea in East Africa and later lived in Sudan before immigrating to the United States a few years ago, he said.

He said Saleh's friends and family were thankful for the support they had received from the Dayton community.

A classmate remembered Ohio shooting victim Megan Betts, the sister of the gunman, as "artistic, polite" and someone who "loved going to band class."

Addison Brickler, 23, rode the bus to school with Connor and Megan Betts. Megan would sit with her friend on the bus every day, Brickler said.

"She always had a smile on her face," Brickler said.

"It's harder for me to wrap my head around why he would do this to someone, his sister."

"Everyone loved Logan," she said. "He was a happy-go-lucky guy."

Turner said her son was out with a few friends when he was shot just outside a bar in Dayton's historic Oregon District.

Turner had a degree from Sinclair Community College and went on to earn an engineering degree from the University of Toledo, his mother said. He also attended Wright State University for a while, according to Seth Bauguess, spokesman for the university in Dayton.

Turner's mother said he had recently started working as a machinist at a company in Springboro.

Responding officers also fatally shot the gunman, identified by police as 24-year-old Connor Betts of Bellbrook, Ohio. Authorities said Megan Betts, who was killed in the shooting, was the suspect's sister.

Dayton Mayor Nan Whaley said the gunman was carrying a .223-caliber rifle, had additional high-capacity magazines with him and was wearing body armor when he opened fire outside Ned Peppers, a popular bar.

Investigators have not yet determined a motive for the shooting.

Sunday's shooting came hours after 20 people were killed and more than two dozen injured in an El Paso, Texas, shooting.