Troy Kotsur took home the Oscar for best actor in a supporting role, becoming the first deaf actor to do so.
KGO
By Gloria Rodríguez 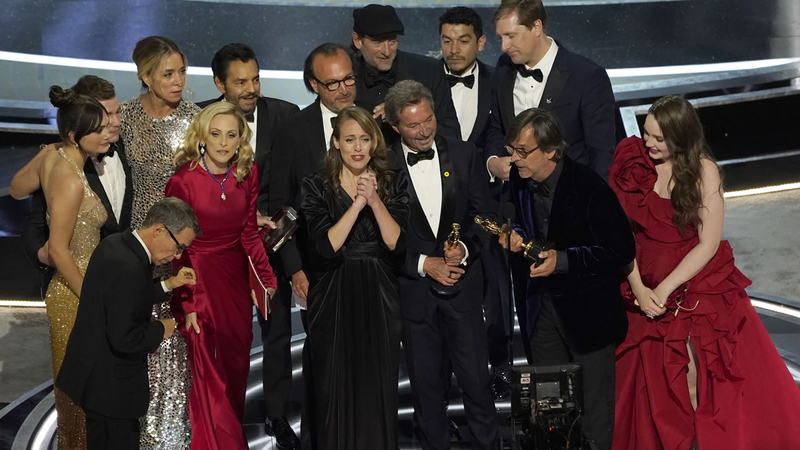 SAN FRANCISCO (KGO) -- From Best Picture to Best Animated Feature, the Bay Area was represented in some major categories in Tinseltown this weekend.

"CODA" was nominated for Best Picture, Best Adapted Screenplay and Best Supporting Actor and won in all three categories.

It's an original film by Apple, based in Cupertino, and is streaming on Apple TV Plus.

The title stands for Children of Deaf Adults and features a predominantly deaf cast.

Troy Kotsur took home the award for best actor in a supporting role, becoming the first deaf actor to do so.

Troy Kotsur of 'Coda' wins Oscar for Actor in Supporting Role, making him the second deaf actor to win an Academy Award.

In the movie, Ruby is the only hearing person in her family and is torn between helping her family's fishing business and pursuing her love of singing at college. Ruby learned American Sign Language as a first language.

The audience rose to their feet as they made the sign for applause when "CODA" was announced as the winner for best picture. The film is being credited as groundbreaking in terms of bringing representation of the deaf community to Hollywood.

The Bay Area deaf community is proud to see 'CODA' nominated for Best Picture and Troy Kotsur up for Best Supporting Actor.

"Luca," by Emeryville-based Pixar, was nominated in the Best Animated Feature category. It lost to Disney's "Encanto."

Rosenblatt's "When We Were Bullies" stems from his personal experience.

While working on a film, it turned out someone who was going to narrate for him went to grade school with him.

RELATED: Oscars producers Shayla Cowan, Will Packer aim for awards show that appeals to all

They had both bullied the same boy with other children.

"I think people are able to plug in their own person, whether they're bullied or whether they were involved in bullying," Rosenblatt said. "So I think it just becomes a personal film for them, too, in some sense, and I've gotten a lot of email responses of people just sharing their story with me."

The Academy Award-nominated HBO documentary short "When We Were Bullies" debuts March 30 on HBO and HBO Max.

Get full coverage on the 94th Annual Oscars here.