The movie is the first with a predominately deaf cast to be nominated for Best Picture.
KGO
By Zach Fuentes 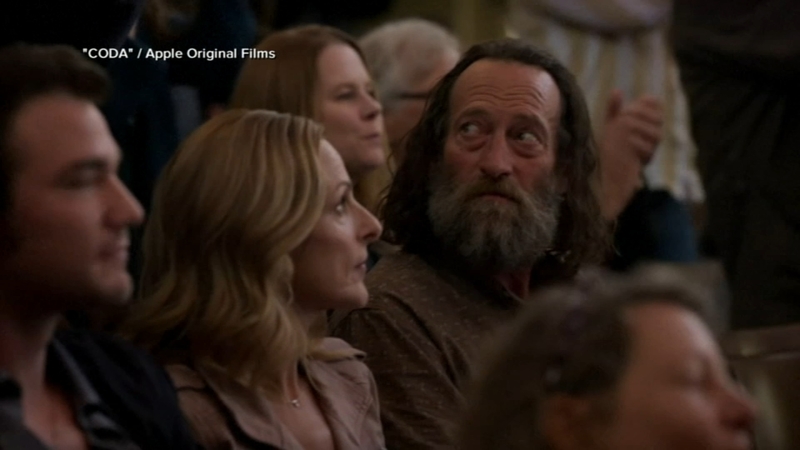 LOS GATOS, Calif. (KGO) -- Oscar Nominations are out -- and a film from Los Gatos-based Netflix is leading the way. Revisionist Western, "The Power of the Dog," received the most nominations with 12, including Best Picture, Best Director and Benedict Cumberbatch in the Best Actor category.

The other nine nominees in the Best Picture category include "Belfast," "CODA," "Don't Look Up," "Drive My Car," "Dune," "King Richard," "Licorice Pizza," "Nightmare Alley" and "West Side Story."

"CODA," which is the acronym for Child of a Deaf Adult, is igniting excitement for the deaf and hard of hearing community.

Not only is it nominated for Best Picture, but it is also making history as one of the actors is up for best Supporting Actor, making him the first deaf male Oscar nominee.

The movie follows the life of a family of four, the father, mother and son are deaf.

The daughter is a CODA, or Child of a Deaf Adult.

His "CODA" co-star Marlee Matlin made history as the first deaf actor to win an Oscar in 1987.

The movie is the first with a predominately deaf cast to be nominated for Best Picture.

"It's really important to show hearing people what it's like as a fly on the wall and immerse themselves in deaf culture," said Troy Kotsur, who plays the father in the movie and is the first deaf male Oscar nominee in a supporting role.

Kotsur spoke with ABC News about the honor.

"It's such a blessing that Hollywood will begin to recognize deaf talent and increase deaf awareness," he said, "I hope that it changes their perspective, rather than thinking of deaf people as villains or folks to have sympathy about. It is a culture and a language. We have our own language, and we have our own culture."

That sentiment is echoed by many right here in the Bay Area deaf community.

"I myself have two children, two boys who are both CODA, who live in my house and they live with me and our culture," said Clark Brooke, the site Superintendent at Fremont's California School for the Deaf.

Brooke's interpreter, Jacelia Washington, is also a Child of a Deaf Adult and spoke about what the movie meant.

"There's not a lot of representation of CODA," Washington said, "We are kind of like in the middle of both worlds and sometimes it can be tough to understand, 'Where do I belong?'"

Veteran Irish actor Ciaran Hinds received the entertainment world's biggest honor... an Oscar nomination for his work in "Belfast." Following his best supporting actor nomination, Hinds said "Having worked in this industry for nearly 50 years, I thought there wasn't much that could surprise me... but I can honestly say, I am astounded."

Brooke says one of the many important and inspiring things about the film is that it was not hearing people playing deaf characters.

"I think that Hollywood is getting it right this time and has been for the last few years," he said, "We have seen a surge in having more deaf characters, and I think that's important for our children to look up to role models and see that 'Hey, I can achieve in this industry.'"

Remember, you can watch the Oscars only on ABC on Sunday, March 27.