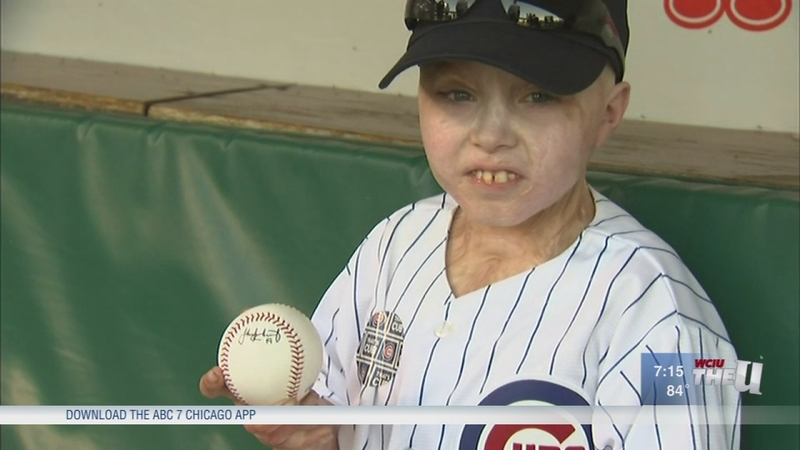 Burn victim gets day of fun in Chicago

CHICAGO -- A young boy's visit to Chicago for a hospital treatment turned into much more than that!

It was Owen Mahan's day off. The 9-year-old from Indiana is recovering from severe burns that he suffered as a toddler in Lawrence, Kan. On Tuesday, just like Ferris Bueller, Owen had a day full of Chicago surprises.


The Navy Pier carousel is a far cry from a doctor's appointment, which is what Owen Mahan was told Tuesday morning when the 9-year-old arrived in Chicago from Indiana.

"Actually, I knew I wasn't going to one," Owen said.

With perfect weather, Owen knew something was up. He was surprised with a day of fun in Chicago - well-deserved for a boy who was once given a zero-percent chance to live. When he was 2 years old, Owen was scalded with hot water and suffered burns over 98 percent of his body.

"I've got a medical background, so when they told me he was burnt with 98 percent of body, I thought it was a typo. There is no way anyone can survive that type of injury," said Susan Mahan, Owen's mother.

Owen not only survived, but with the help of his mother Susan, he's thriving. After his tragic incident, she took Owen in as a foster child and then adopted him.

"I think all kids need to think they are love and accepted no matter what their circumstances might be," she said.
Owen has been through 49 surgeries. His mother said that every day, his will to live humbles her - enough so she was willing to join him on the Navy Pier Ferris wheel.

"My mom is afraid of heights!" Owen said.

Owen's day in Chicago was arranged by good friends who wanted to give him something fun to do before his upcoming June 5 surgery to amputate his other leg.

And after Navy Pier, it just kept getting better.

In another surprise, Owen headed over to the Wrigley Firehouse where got to ride in the truck and was given a full uniform making him an honorary fireman.