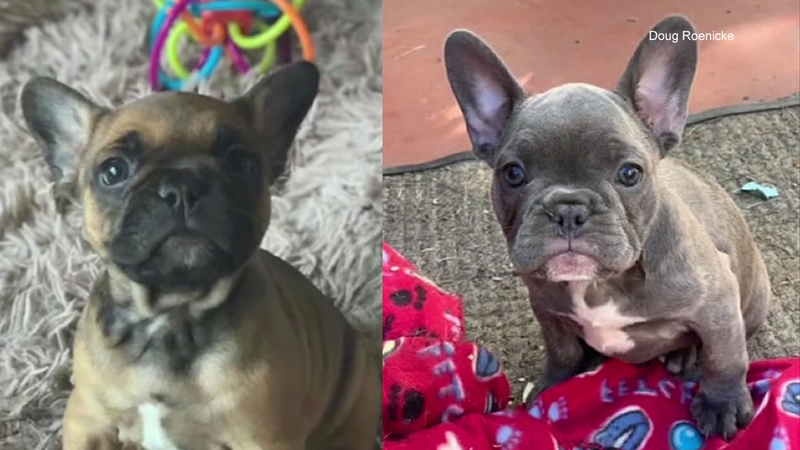 SAN FRANCISCO (KGO) -- It's been an anxious 24 hours for a San Francisco man who has been frantically searching for his two French Bulldog puppies. The dogs, "Indigo" and "Lila" were stolen from the owner's home on Saturday but there is some good news on Sunday.

Roenicke, who is a dog trainer and breeder, says Indigo and her sister Lila were stolen from his San Francisco home on Saturday around 1:50 p.m.

He noticed the window was open and the puppies were missing from their pen and Roenicke says the apparent suspect left behind a shirt and a drug pipe.

"We've been working with police I put out 400 flyers last night," Roenicke said.

Very early Tuesday morning at 4 o'clock Emilie Talermo was reunited with her 5-year-old miniature Australian shepherd named Jackson. A San Francisco Police officer had driven to Los Angeles to pick him up.

Hours later, this man was spotted inside a 7/11 store on 18th Street with two puppies on the counter matching the same description as Lila & Indigo. Employee Jaime Alvarez says the man wanted to sell them.

Then, on Sunday afternoon, Doug Roenicke got a call from a woman who bought one of the pups from a man on the street for her daughter. The family did not want to be identified but told us, it seemed too good to be true. Indigo was reunited with her owner.

"I put the word out, people started connecting," Roenicke said. "She bought this for her girls and knew it wasn't right."

A short time later, police detained a suspect on Mission Street, about his possible connection to the stolen dogs.

SFPD is still investigating the incident and released a statement to ABC7 News about the suspect here:

Following the return of the dog and arrest of the suspect, a second party came forward and contacted the owner of the dog, believing she had purchased the second stolen dog. The two met and determined that it was the stolen dog and the dog was returned to the owner.

While an arrest has been made this remains an open investigation. Anyone with information is asked to call the SFPD 24 Hour Tip Line at 1-415-575-4444 or Text a Tip to TIP411 and begin your text message with SFPD. You may remain anonymous..

"WE DID IT" The 2 French bulldogs that were stolen in SF have been reunited with their owner! @SFPD has made an arrest and identified the suspect here: https://t.co/j62k6EXVWh

UPDATE: both dogs have been found! Lila was found in the last 10 minutes! https://t.co/WYy7Nmbbmv

SF Man says his two French Bulldog puppies “Indigo” & “Lila” were stolen Saturday from his home. Employees at a Castro convenience store report seeing the pups with a man who offered to sell them for $500 each. #SFPD investigating. pic.twitter.com/bTyjv73qnM