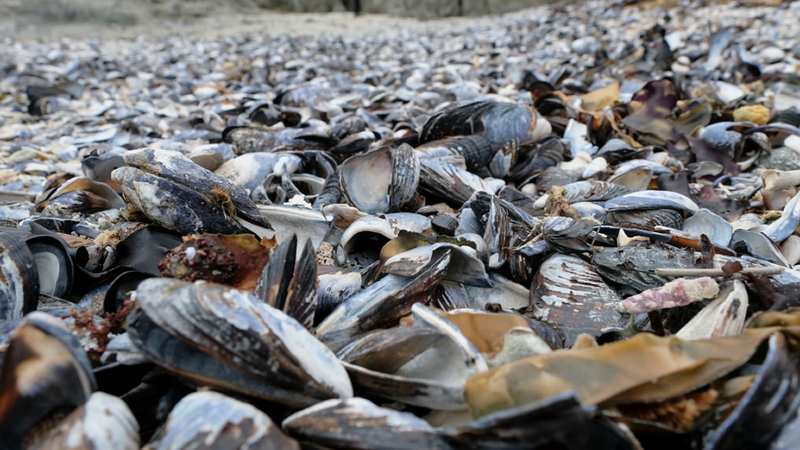 A sliver of low-lying summertime fog, year-round tranquility, and predictability---or maybe not for Jackie Sones, a researcher at the Bodega Marin Lab.

What concerns @UCDavis researcher Jackie Sones is the frequency of such events, not only here but across the planet. Includes weather events. "Mussels are a key part of this ecosystem. As they go, other species could follow." #ABC7NOW #ClimateCrisis #mussels #BodegaBay pic.twitter.com/jybbSmguIT

She had been out on the rocks one afternoon last month when she noticed a distinct change.

"Normally the mussel beds are dark and tight. It looks like a carpet," she said.

But, not that day. Not with bleached, dried out, empty mussel shells cracking beneath her shoes.

They stretched as far as Jackie could see. "We're talking tens of thousands of mussels."

Researcher Jackie Sones had been walking the rocks doing other work when she saw the mussels. Blame those three very hot days in June coinciding with a low tide. The mussels could not endure 100 degree temperatures. #abc7now #BodegaBay #mussels #ClimateCrisis pic.twitter.com/0P9SUwIzBP

It's what scientists call a mass mortality event, or die-off.

Since the initial discovery, we now know that it extends as far north as Fort Bragg, with climate change as the likely cause.

"We have seen smaller die-offs, but never a die-off to this extent," said Sones.

It is the largest event like this in fifteen years.

Researchers blame a confluence of factors that should never happen in June; a three-day heatwave combined with low tides.

Just back from #BodegaBay to check out the massive die-off of Northern California. This is an issue reaching as far north at Fort Bragg. Researchers see fingerprints of an unseasonably warm #ClimateCrisis event. #abc7now pic.twitter.com/3MSUveTa9a

The mussels never had a chance.

But that day, in the heat wave, their environment hit three digits.

"In essence, they were cooked," said Sones.

It matters because mussels are foundational in these waters. Other species depend on them for survival. Think biological dominoes.

"So if we see more events like this more frequently we will be more concerned about the mussel bed and their ecosystem as a whole."

What began with a pleasant walk, now interpreted as a warning shot.