135 candidates ran in the 2003 recall election of Governor Gray Davis. Among them, former adult film star Mary Carey, who tells ABC7 News she is mulling jumping in again if the current recall effort qualifies.
KGO
By Liz Kreutz 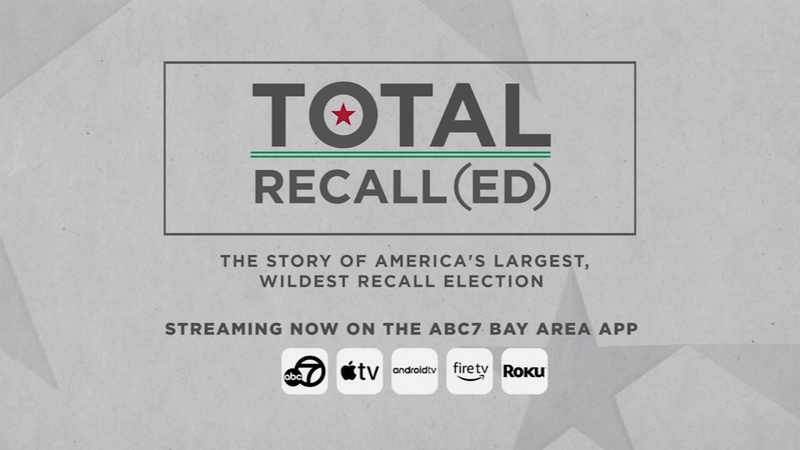 SAN FRANCISCO (KGO) -- As Californians look towards a likely gubernatorial recall election for Gavin Newsom, ABC7 News is looking back at the first and only other time it ever happened in the state: the 2003 recall election of Governor Gray Davis.

At the time, 135 candidates jumped into the race for governor. There was bodybuilder Arnold Schwarzenegger, media mogul Arianna Huffington, Republican congressman Tom McClintock and Lt. Governor Cruz Bustamante, who went against the Democratic party establishment when he decided to also throw his hat into the ring. On top of that, there were dozens of other so-called citizen candidates, including former adult film star Mary Carey and college student Daniel Watts, who ran using money he won on "Wheel of Fortune."

So, where are these folks now? And what do they think of the current effort to recall Governor Gavin Newsom? We spoke one-on-one with some of them for our ABC7 Originals documentary, "Total Recalled: The story of America's largest, wildest recall election." Here's excerpts of what they told us. 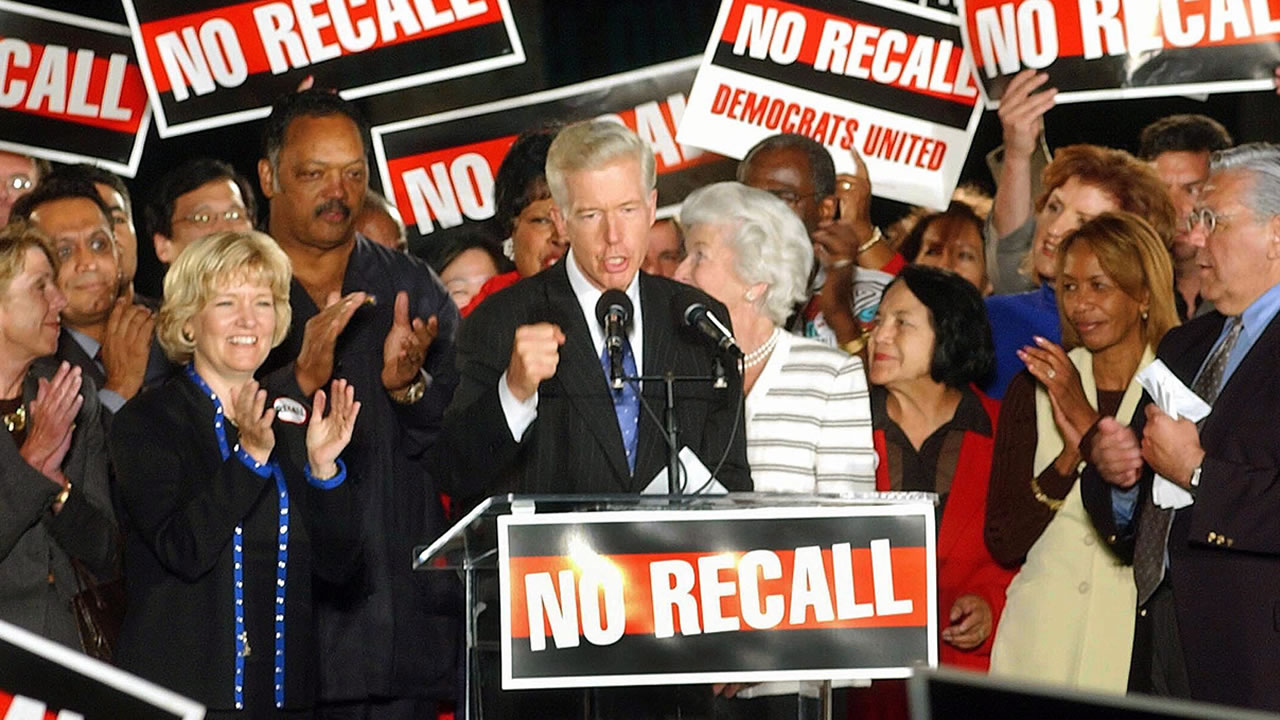 Former Governor Gray Davis is currently the only governor in California history to have ever faced a recall election, and only the second governor in U.S. history to be successfully recalled and removed from office (the first and only other was North Dakota Governor Lynn Frazier in 1921).

But this title doesn't seem to faze the former governor. Over Zoom with ABC7 News, it became clear that Davis has come to peace with his reality. Did it hurt to be recalled? Of course, he told us, but added: "You can pull your hair out and you can rant and rave, but I didn't do that stuff because A) What's the point? and B) that's the nature of an election. There's always a winner and there's always a loser."

Davis lost the recall by more than 10 points. This time around, he doesn't expect Newsom will meet the same fate. "This is a vanity project," Davis said. "If it does qualify, it has virtually no chance of succeeding." He pointed to the breakdown of California's electorate, which over the past two decades has become overwhelmingly Democrat.

He said his biggest advice for Newsom is two-fold. First and foremost: "Win the war," he said, referring to the COVID-19 pandemic. "And you win the war by getting shots in peoples' arms as quickly as humanly possible."

RELATED: Map shows where recall Gavin Newsom signatures are coming from in California

Second, do whatever you can not to run against a global celebrity. Davis knows this from first-hand experience.

"If you have a choice, choose someone other than Arnold Schwarzenegger, or a similar global celebrity, to run against in a recall," he said. "Global celebrities have a hold on our imagination and our culture in a way that if you're not one you don't fully appreciate."

Even if one does jump into the race, though, Davis thinks Newsom still has a good chance of succeeding. "The public is all in the same boat," he told us. "We all want this pandemic to go away, and we want the governor to spend all of his energy making that happen." 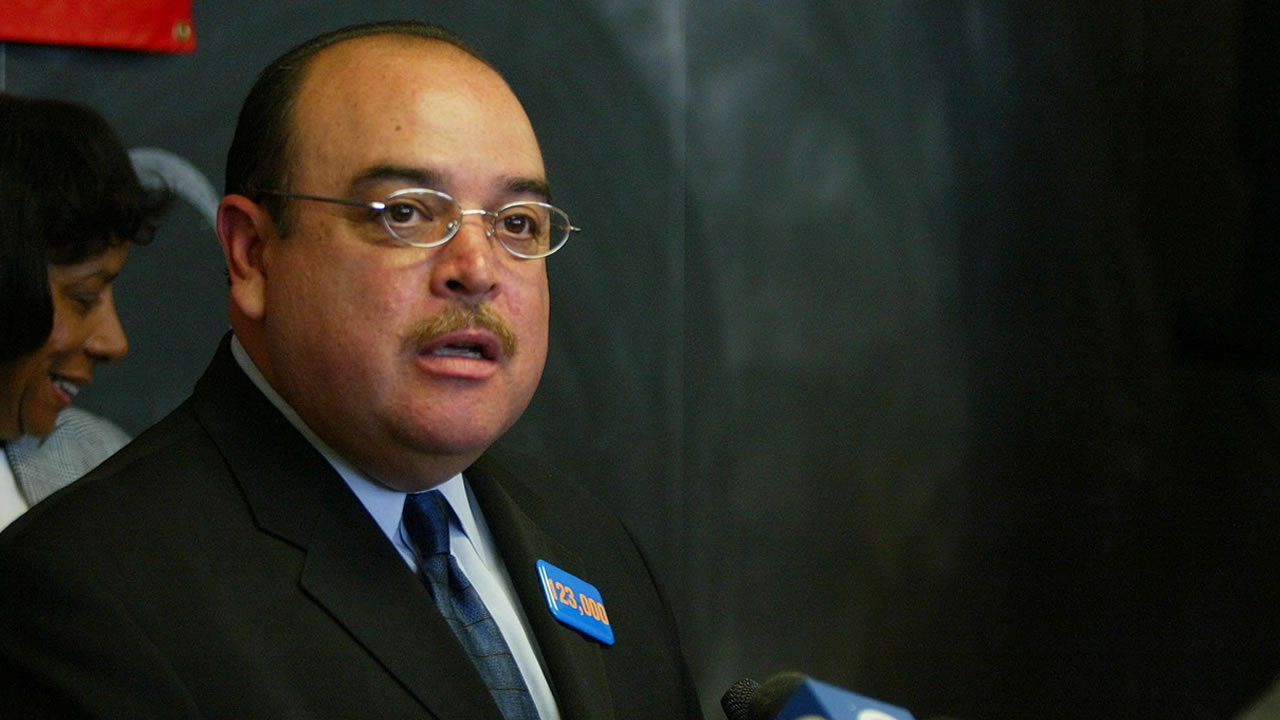 In 2003, then Lt. Governor Cruz Bustamante caused quite a stir among the Democratic establishment when he decided to join the race to replace Gray Davis. Although his slogan was "No on the recall! Yes on Bustamante!" many Democrats -- including Governor Davis himself -- felt the best strategy for the party was if no Democrat put their name on the ballot.

Bustamante didn't see it that way then and, nearly twenty years later, still doesn't see it that way now. In a recent interview, he told us he has no regrets about his decision to run. "I wasn't running against Davis. I was running against Arnold," he said. "I ran because I was really trying to protect the state...and I didn't know if the governor was going to be able to make it."

Davis' allies disagree, and to this day see him as someone who became a pariah in the party. While Bustamante said he feels he made the right decision, he recognizes he paid a price.

"Of course. I lost the campaign. I didn't have enough money. I had to pay it all back, and that took some time," he said. "So, yeah, there's a price to pay...but I have no regrets about it. I knew going in that these kinds of things could happen."

Already a similar discussion has emerged for Governor Gavin Newsom. Should all Democrats stay out of the race, or should there be a Democratic alternative in the event the recall passes?

Although Bustamante chose the latter route in 2003, he said this time around he thinks the best strategy is for no Democrat to get into the race. His reasoning comes down to the difference in circumstances.

"Gray Davis was polling in the 30s. And Newsom is polling in the 50s. That's a huge difference," he told us. "There's no one that's needed in this particular situation to protect our state because the governor is going to beat this recall handily."

He said his reason for running doesn't apply to the current situation. "I ran for what I believe to be a very specific purpose," he said, "And it was not in my interest to do so."

He said his only regret from 2003 is not finding a way to beat Schwarzenegger. "I should have found a way. I guess I just wasn't good enough with a broom," he said, referencing the iconic moment when Schwarzenegger held up a broom and said he would sweep out Sacramento. "I should have brought a mop. I don't know." 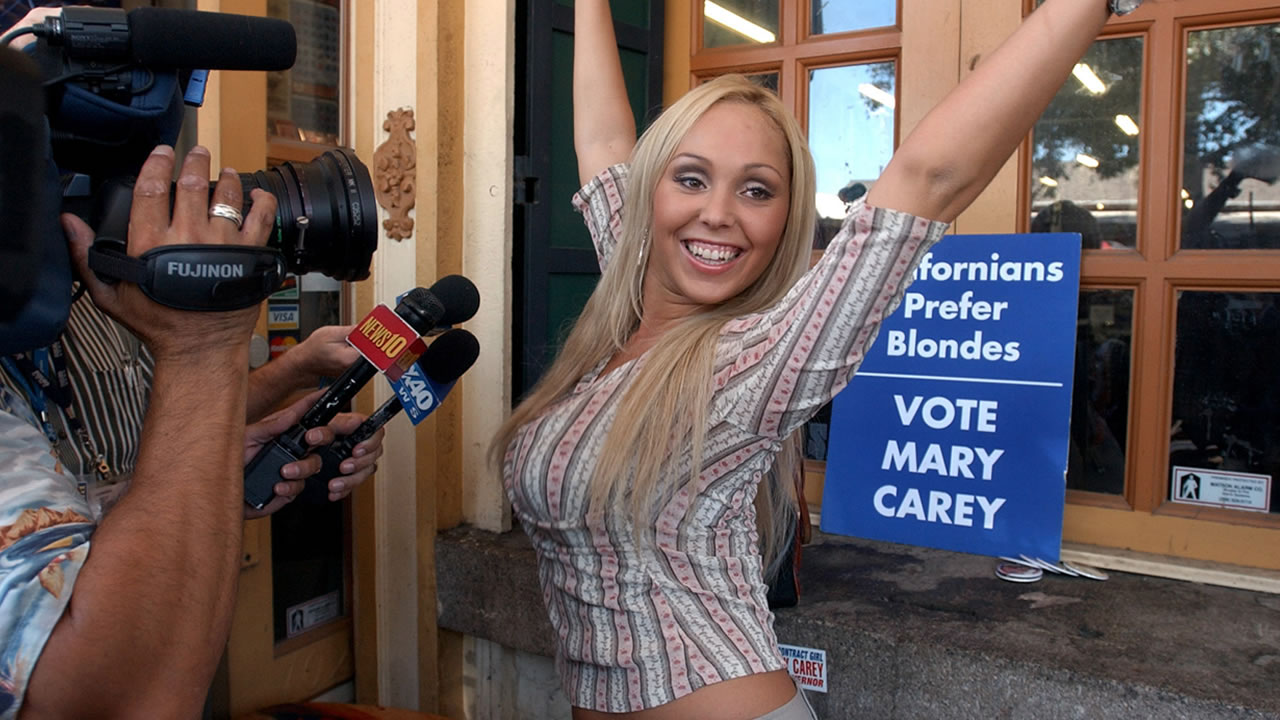 In 2003, Mary Carey was 23 and had recently arrived in Los Angeles looking to make a name for herself in the adult film industry. Her agent had an idea to get her famous fast: Run for California governor!

Now 18 years later, Carey thinks back to her campaign with pride. "When I decided to run for Governor, when the whole idea came about, it was a publicity stunt. We were doing it to get my name out there," she told us from her home in Parkland, FL. "But then as it went along, I got more serious about it, because I thought maybe I can make a change."

Carey, who currently splits her time between Florida and her home in Los Angeles, said she's aware of the current effort to recall Governor Gavin Newsom and is on the fence about whether she supports it. On one hand, she said, she understands the frustrations with Newsom's handling of the pandemic. But on the other hand, she thinks a recall is a waste of money. Plus, she added, "I do think he's sexy."

Either way, if the recall qualifies, Carey said she's already considering jumping into the race once again.

"I told my husband, I think we need to go back to California...I think I might do it again," she said. "And this time, I'm older and I'm smarter, and I think I can go to a better job." 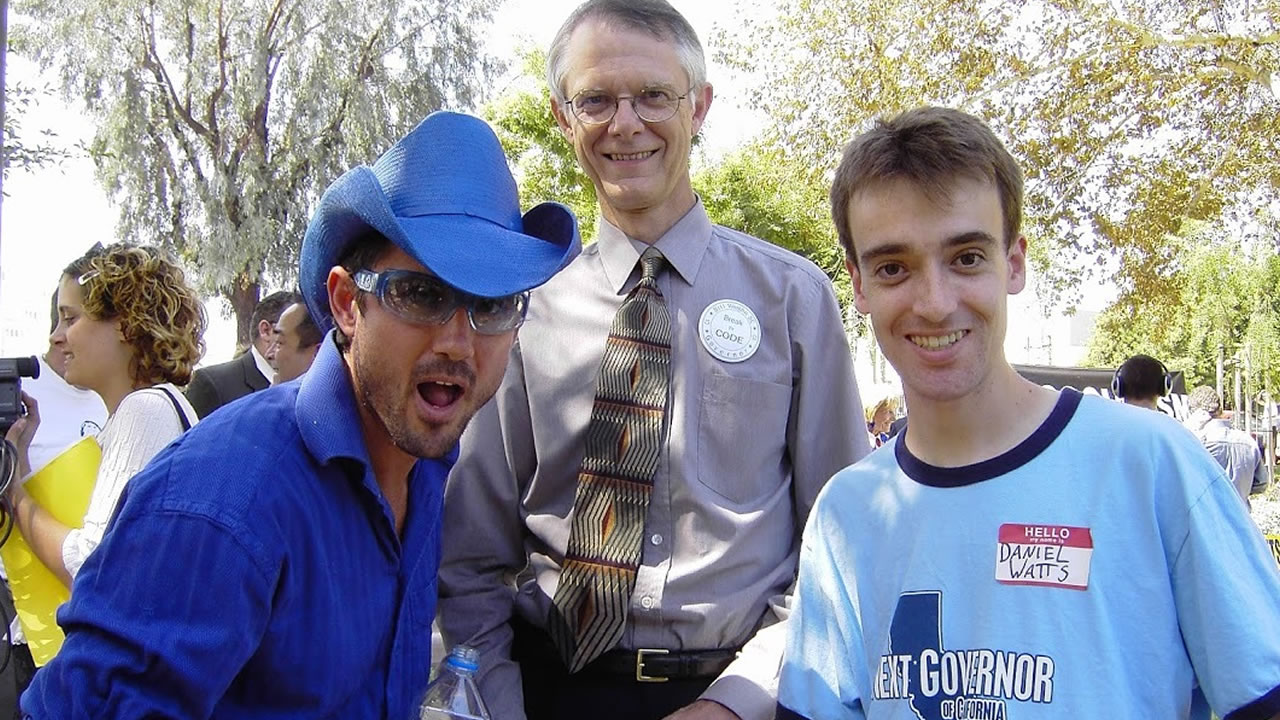 Not all citizen candidates were seeking fame and publicity. For Daniel Watts, a college sophomore at UC San Diego, he jumped into the race to bring awareness to a singular issue: The rising cost of college tuition.

Watts, who grew up in the Bay Area, said he decided to run for governor after winning $11,300 during an appearance on "Wheel of Fortune."

"I was really into politics, and I still am, and I saw that the bar was really low to get on the ballot, and I just thought it would be a lot of fun," Watts told us.

Compared to some of the joke candidates, like a man who called himself "The Bum Hunter," Watts saw himself as part of a group of "minor" candidates, who really hoped to make a difference. "Whenever I appeared in campaign stops, I had a platform, it was lower student fees for college students, and I was upfront," he recalled. "I said, 'I know I'm not going to win. My goal isn't to win. I'm not a crazy person. All I want to do is make the real candidates, the people who will win, pay attention to this issue."

He said by the end of the campaign nearly all of the top candidates had addressed the issue of college tuition.

Watts, who now works as an attorney in San Diego focusing on free speech, said this time around he's most likely not going to run in the recall election -- although he is tempted.

"I think the recall is the epitome of democracy," he told us. "Anyone can run, get signatures, get money, and your name is right next to Arnold Schwarzenegger or Gavin Newsom on the ballot. That's how democracy should be."

His advice for anyone who does throw their hat into the ring: "Just assume that if you're running, you're going to lose," he said. "So, set aside any pretenses you have about winning and think about what you can actually accomplish."

These interviews are part of ABC7 Originals documentary "Total Recalled: The story of America's largest, wildest recall election," which looks back at the 2003 recall election of former Governor Gray Davis.