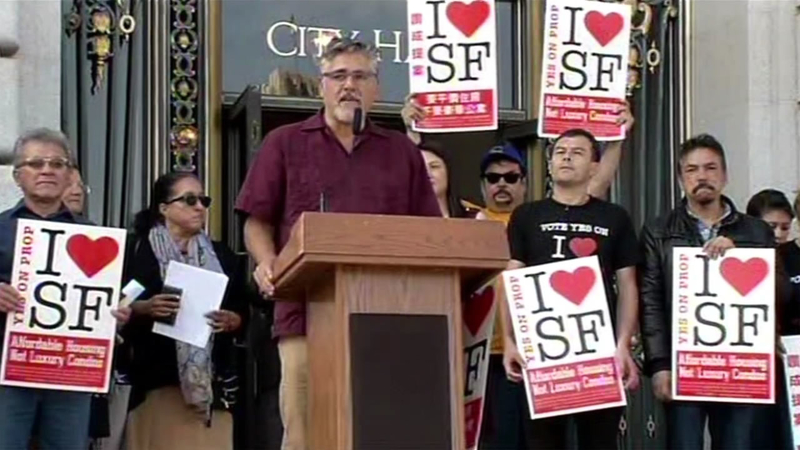 SAN FRANCISCO (KGO) -- There is a controversial measure on the Nov. 3 ballot in San Francisco called Proposition I, which proponents say deals with the city's skyrocketing cost of housing in the gentrified Mission District.

Some residents in the Mission District say they're being pushed out by hipsters and tech workers. Proposition I would halt the construction of expensive condos for 18 months.

Those are all reasons he started working in the Mission District more than 42 years ago. But lately, he's watched the hipsters arrive.

"Well you know, hipsters are not that hip," he said.

In his opinion, they're not that hip. But more of them, along with tech workers, are moving into the area. Meanwhile, Yanez fought eviction two years ago.

"It was pretty demoralizing," he said. "And my partner was very sick, she's very sick with cancer and it was very stressful."

He fought and was able to stay, but he's one of many. And the plastered posters say it all. This push and pull is at the center of Proposition I.

Proposition I would stop construction of market rate housing in the Mission District for 18 months.

"Ten-thousand families have been displaced. If you make less than $75,000 you have no opportunity to move into the Mission District," Mission Economic Development Agency spokesperson Gabriel Medina said.

On Wednesday, supporters of Proposition I presented a Mission District neighborhood stabilization plan. It's the framework of what those 18 months would look like. But opponents of Proposition I say halting construction could have the opposite effect.

Other groups for Proposition I said it's not meant to be a fix-all, but rather a pause.

"Sometimes you need a cooling off period, to step back, take a wider view of what's happening and come up with a solution," Council of Community Housing Organizations Co-Director Peter Cohen said.

The Mission may be changing colors before our eyes.

"I see how gentrification is affecting everyone," said painter Brett Vanhorn. "There's a loss of art in the city."

Yanez said he just doesn't want to see another friend get evicted, and that number just keeps growing.