KGO
By David Louie and Amy Hollyfield
LOS ALTOS, Calif. (KGO) -- On a day when 40 bodies were removed from the site of the Malaysian Airlines plane crash in Ukraine, and with his secretary of state trying to broker a Middle East peace deal, President Barack Obama had nothing to say in public during his 16 hour trip to the Bay Area.

The president came to Silicon Valley strictly to raise money for the Democratic Party. So his prepared remarks didn't have any of the hot button issues one might expect like Gaza or the jetliner crash. If the subjects came up in any type of questions from invited guests, nobody said so.

Protesters with different issues took up opposite corners in Los Altos where they thought the president's motorcade would pass. On one side, people hoped to get Mr. Obama to take a more visible role to bring peace to the fighting in Gaza.

"We really want Obama to step up and really take sides, or at least be neutral and help resolve this conflict," Los Altos resident Malika Junaid said. "Why, as the U.S., are we so quiet? We seem to be the superpower and we're doing nothing for what's happening on the ground there."

Across the way, another group complained the president isn't pushing for a free and open Internet for everyone as he did during his last campaign. Some companies that stream entertainment over the Internet are seeking priority bandwidth over individuals.

"I don't think Obama is keeping his promise," Mountain View resident Erica Lee said. "He said he was for a free and open Internet. By appointing Tom Wheeler as the FCC commissioner he's kind of turning his back on the people and we're here because we want to send him a message and tell him, this is what we want."

However, the motorcade took a back way and bypassed the protesters, creating traffic jams that closed the area's two lane roads.

The fundraiser for the Democratic Congressional Campaign Committee drew 90 people to the home of real estate mogul and restaurant owner George Marcus and his wife Judy. Attendees paid from $10,000 to $32,400 for photos with the president. But one young man named Ryan says he got something even better.

"He was wonderfully optimistic and positive," said Nick McKeown. "Of course, criminal justice is an issue very close to his heart. And it gave me great confidence that criminal justice continues to be a very important issue for him." 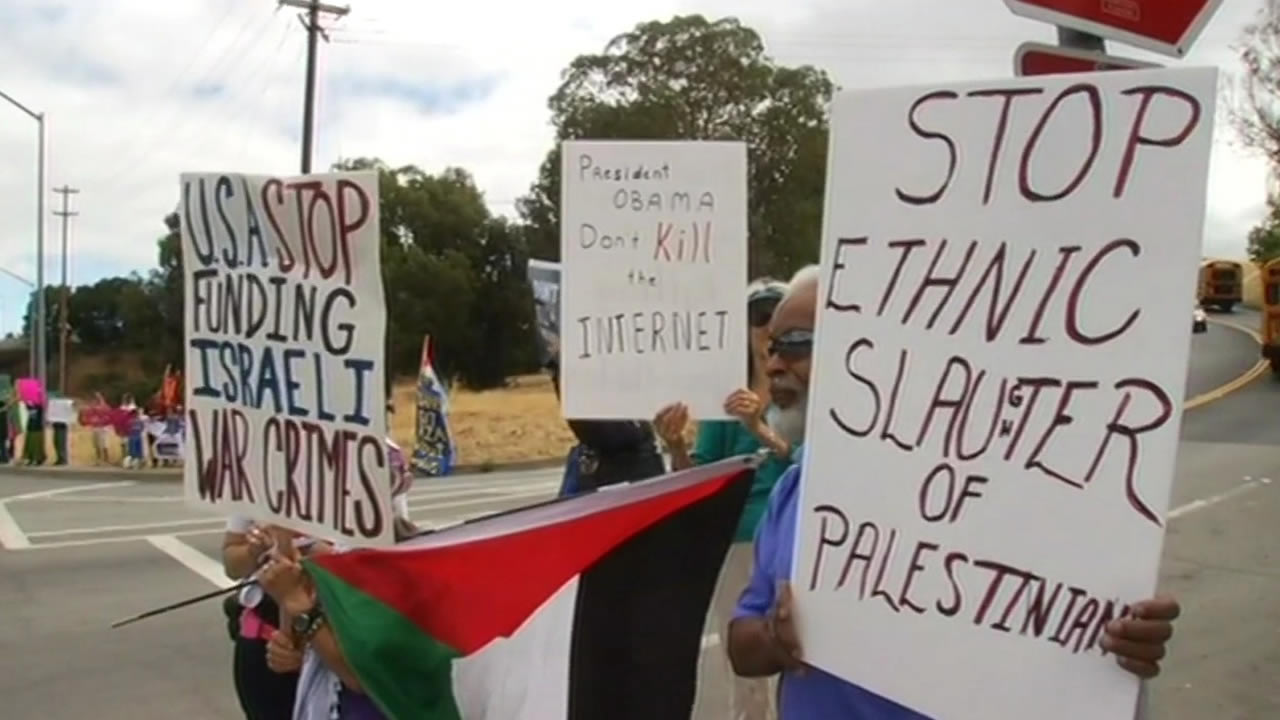 Pres. Obama greeted by protests in the Bay Area
Protesters greeted President Barack Obama during his visit to the Bay Area for a quick fundraising trip.

Before the president headed to Los Altos, he was in San Francisco for a short time. He left Seattle Tuesday night and arrived at San Francisco International Airport around 9:30 p.m. It was a low key arrival, no dignitaries on hand to greet him.

The president was visible for a few seconds when he left the Intercontinental Hotel Wednesday morning. That's where he stayed the night. But all we saw of him was his motorcade.

Howard Street in front of his hotel was shut down overnight and all morning, creating a mess for commuters in the South of Market area.

Traffic was also snarled on Market Street when he moved to a House Majority PAC event at the Four Seasons Hotel.

ABC7 News asked the White House why he couldn't do it all in one hotel, but they haven't responded yet.

We asked hotel guests what it was like staying in the same place as the president. One woman told us she did hear a protester at 6:15 a.m.

"Other than the protester this morning, which was was barely anything, and then the metal detector last night, there was really nothing," said Ohio resident Shannon Goad. "It was pretty quiet. Yeah, it was exciting. Didn't know he was going to be in town and I'm just in town for work. So yeah, exciting."

Obama departed from San Francisco International Airport at about 1:47 p.m. on Air Force One and headed to Los Angeles for more fundraising for the Democratic Party.

This was the president's 18th visit to the Bay Area. 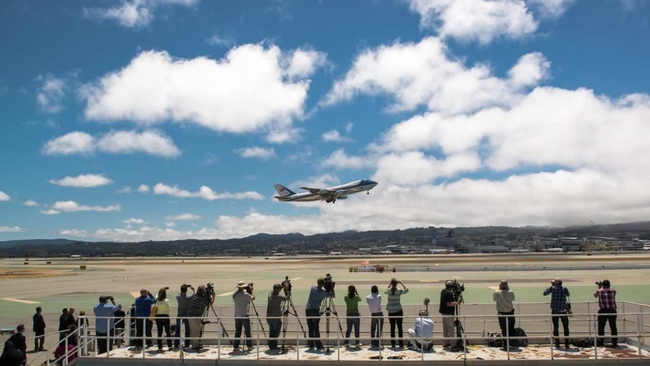 PHOTOS: What it takes to get a shot of POTUS
More Videos
From CNN Newsource affiliates
TOP STORIES
Health experts: Don't let your guard down this July 4th weekend