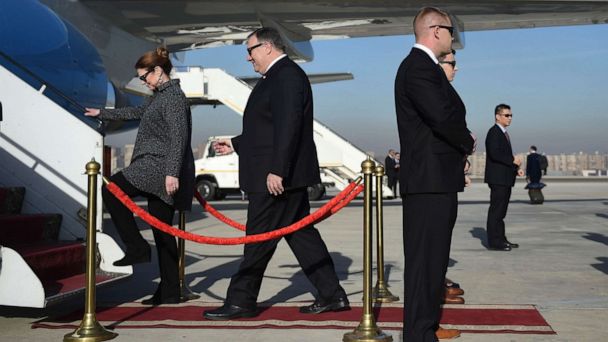 After nearly 22 months in office, Secretary of State Mike Pompeo will make his first trip to sub-Saharan Africa on Saturday, in a bid to reassert the U.S. as the leading partner to the world's youngest and likely to be most populous continent amid strong Chinese influence and a growing Russian presence.

The top U.S. diplomat will visit Senegal, Angola and Ethiopia, describing them as "three countries in various stages of development in their transition to democracy and their stability."

His major themes will include promoting trade with the U.S., good governance and the rule of law, while also urging African officials and business leaders to eschew Chinese investment.

But he will face considerable headwinds because of the Trump administration's lack of engagement with Africa, President Donald Trump's reported disparaging remarks about the continent and several new policies, including proposing budget cuts for African programs, expanding the president's travel ban to include nearly a quarter of the continent's population and potentially cutting back the U.S. military's presence.

"The challenge that Pompeo's facing in Africa is explaining the contradictory messages coming from Washington," said Witney Schneidman, a fellow at the Brookings Institution's Africa Growth Initiative. "It's the lack of attention that's been paid. It's the fact that (former national security adviser John) Bolton rolled out this Africa strategy 14 months ago, and since then, very little has been accomplished where many other nations have moved forward."

Pompeo's trip will mark the first by a Trump cabinet official there in 19 months, after Commerce Secretary Wilbur Ross visited Ethiopia, Kenya, Cote d'Ivoire and Ghana and pledged the U.S. would facilitate $1 billion of private-sector deals in July 2018. Trump's previous Secretary of State Rex Tillerson only visited once in his 13 months on the job, getting fired the day after returning from Ethiopia, Djibouti, Kenya, Chad and Nigeria.

Still, African officials are largely willing to look past that and eager for increased U.S. investment, especially as an alternative to Chinese financing, with its excessive amounts of credit, tied to steep interest rates and high risk of forfeiture. That's a message that Pompeo, one of the administration's lead China hawks, has carried on nearly all his foreign trips, warning Southeast Asian countries of China's "debt-trap diplomacy" or Western European allies against using Huawei, the Chinese telecom giant that leads in 5G technology. Just last Saturday, he warned China is always "working you ... working the team around you" in a speech to U.S. governors.

But African leaders already know all that, according to Ahmadou Aly Mbaye, economics professor at the Cheikh Anta Diop University in Senegal, who said that they want to hear what the U.S. will do to help them finance their economic growth and provide for their burgeoning populations instead.

"The needs for investment are huge, in particular, in terms of infrastructure investment," Mbaye said, but, "The existing routes the West and the U.S. are using have shown their limitations. The World Bank and Western international organizations provide very little to fill in these gaps. ... If you remove China, you have almost nothing left."

Pompeo told reporters traveling with him on Thursday that he wants to talk to leaders in all three countries and at the African Union about encouraging economic reforms to increase market access, combat corruption and promote the rule of law -- all of which would bring more American investment, he said.

That will be a particularly important message in Ethiopia, as Prime Minister Abiy Ahmed pushes to liberalize the economy by privatizing state monopolies, and in Angola, where President Joao Lourenco has tackled corruption and tried to shift the country off economic dependence on oil exports. Pompeo said the U.S. could also provide technical assistance to help spur these reforms.

To that end, Trump may host African leaders for a U.S.-Africa investment summit in Washington, co-hosted by South Africa, according to Lana Marks, the U.S. ambassador in Pretoria and a close Trump friend.

The administration also requested in its new FY 2021 budget $800 million for the Development Finance Corporation, a newly created government agency that provides financing for private development projects. That's more than double the $299 million Congress gave it in fiscal year 2020. Trump's budget proposal also sought an additional $50 million for its Prosper Africa initiative to increase two- way trade, for a new total of $75 million. But overall, the budget proposal slashes assistance to Africa by 39%, or $3.23 billion, and funding for key health programs in Africa like the President's Emergency Plan for AIDS Relief, or PEPFAR, which would see a 26% cut.

There is a similar contradiction in the administration's military posture across the continent. Senior officials, including Assistant Secretary of State for African Affairs Tibor Nagy, have warned for months now about the deteriorating security situation in the Sahel, the region situated between the Sahara desert and the savanna and stretching across the continent from Senegal and Mauritania to Sudan and Ethiopia.

With terrorist fighters and weapons flowing south from Libya, the Sahel has seen a dramatic rise in terrorist attacks -- with Nagy warning in November that the U.S. and European strategy to contain it was not working: "We need to have a much, much more robust engagement. There has to be much more robust coordination."

But the Pentagon is currently reviewing whether to slash its troop presence in West Africa. Defense Secretary Mark Esper said Thursday no decision had been made about the U.S. counterterrorism mission there, but the Pentagon announced Wednesday that about one thousand service members would depart as part of a change in mission in East Africa, where a special Army unit to train local partner forces will replace members of an Army infantry division.

Even that scaling down "makes very little sense," according to Michael O'Hanlon, a senior fellow also with Brookings, who called it "an overly narrow fixation on pulling forces out of Africa and elsewhere in order to get them closer to Russia and China" and position them for "great power" competition, as Trump's national security strategy says.