Obama arrives in San Francisco ahead of conference with tech leaders 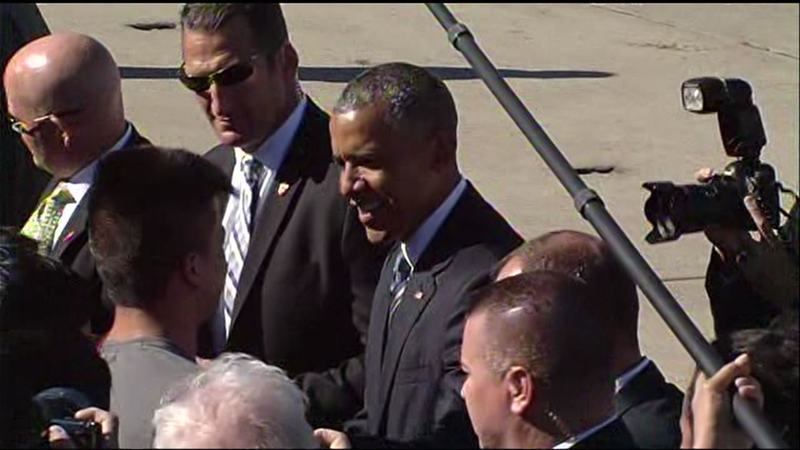 Obama arrives in SF ahead of conference with tech leaders

SAN FRANCISCO (KGO) -- President Obama was in the Bay Area Thursday night. He touched down just past five this afternoon at Mofett Field. He then hopped on Marine One and headed to San Francisco.

Obama made an unexpected stop for dinner Thursday night in San Francisco.

Despite the cold snap on Townsend Street, a sizable crowd waited on the sidewalk to see President Obama. Most stumbled upon the scene by accident.

"I was walking home from work, and saw the police around the corner and was like, whoa," said San Francisco resident Matthew Herbst.

The president had dinner with Silicon Valley VIPS at 25 Lusk. One insider tweeted pictures. A passerby shared a periscope of the president's arrival at the restaurant.

Most spectators on the outside didn't see much, but they said it was enough.

"I would stay here overnight to see him. He's my best," Gloria Hernandez said.

"I was feeling really excited just to know that I was so close to him," said Obama supporter Jim Shepich.

One couple happened to have reservations. "As he left, he was taking pictures. We got our own pictures and gave him a standing ovation and I was yelling, 'We love you Obama,'" said patron Mark Iverson.

The president went straight to the restaurant from Crissy Field, where he landed around 6 p.m. People there were also pleasantly surprised to have been in the same place at the same time as president Obama.

"It's pretty amazing. This is the first time I'm seeing the real thing," one bystander said.

Obama will stay overnight in the Bay Area and headline the seventh annual Global Entrepreneurship Summit at Stanford University's Memorial Auditorium, where he will make remarks during a partner plenary scheduled for 9:30 a.m. Friday.

He will then take part in a Google Portal virtual conversation with entrepreneurs at the university shortly after noon Friday.

The president is scheduled to depart from Moffett Field at 1:35 p.m. Friday for Seattle, where he will speak at a reception for Gov. Jay Inslee and a Democratic Congressional Campaign Committee event.

Obama attended Democratic fundraisers during his last two visits to the Bay Area in February and April.

Invited guests fenced in on the tarmac for #POTUS arrival around 5:30. #abc7now pic.twitter.com/h14lAnKQSq

Marine One is standing by to airlift #POTUS to San Francisco after landing at Moffett Federal Airfield. #abc7now pic.twitter.com/BrbT3MLasR

Secretary John Kerry departs aboard his aircraft ahead of #POTUS landing around 5:30 at Moffett Field. #abc7now pic.twitter.com/WoprwdRPRe

Ready to greet #POTUS when he lands at Moffett Federal Airfield this afternoon. #abc7now pic.twitter.com/fSTmr7xOQg