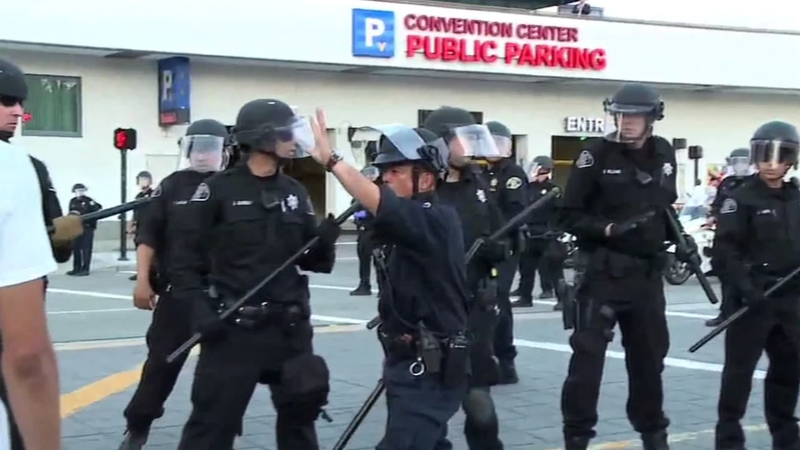 SAN JOSE, Calif. (KGO) -- Both the police chief and the mayor of San Jose are defending how they handled the violence at a Donald Trump rally on Thursday night.

The protest happened outside San Jose's Convention Center, where Trump held a rally inside. When Trump supporters left the rally on Thursday night, many were attacked, harassed and some were punched, including women.

Four people have been arrested and one officer was injured. While a few people sustained injuries, police defend their actions, saying several thousand others arrived and left safely.

"Obviously in hindsight, we would say that was not enough," said San Jose Police Chief Eddie Garcia, acknowledging he could have used more than the 250 officers trying to keep the two asides apart.

Police maintained lines to keep protesters from harassing or attacking people as they arrived and left the Trump rally.

"The disciple that they showed, I think, led to the safety of thousands of others as well. Again, even though the assaults that occurred were appalling," said Garcia.

But the protesters became provocative, throwing a bottle at one officer and getting into fights with rally attendees.

"I'd seen one person get a beer bottle thrown at their head, and they started bleeding. I saw another, I think it was five people on one person. It was actually a Trump supporter getting beat up by a bunch of protestors. I saw three cops come out there, and they had to pull them off," said Nic Stukan, a witness.

Steve Tong was hassled as he went to the parking garage after the rally. He intervened when protestors began to bother an elderly couple.

"They provoked me so that they can throw some punches, stuff like that. Another protestor tried to rip the sign out of my hand. They tried to take the sign away from me," said Tong.

Chief Garcia said the goal was not to abridge free speech. But the lines formed to separate the two groups didn't protect everyone. And some did get injured.

"The violent behavior exhibited by some protestors last night was reprehensible, completely unacceptable and unrepresentative of our democracy and this City. We saw demonstrators behaving poorly and our officers clearing the streets as safely and expeditiously as possible. Officer safety and crowd control techniques are critical and cannot be abandoned when protestors scatter from area to area faster than the police lines can move.

"Furthermore, de-escalation techniques are important -- not just when someone has a weapon. We are not an "occupying force" and cannot reflect the chaotic tactics of the protestors. Instead, we achieved our goal of clearing the streets and making arrests in an appropriate manner. Our officers should be commended for both their effectiveness and their restraint.

"Let me be clear: the violence that occurred last night was not unchecked. Four arrests have already been made, and I have immediately assembled a task force, headed by the Bureau of Investigations Chief Shawny Williams, and in coordination with the Santa Clara County District Attorney's Office, to review all video evidence and investigate all reported assaults or other crimes from last night's incident. I'm calling on the public as well as media outlets to submit all video evidence to our Police Department so we can root out those whose intentions were to disrupt our civil democratic process and put the safety and welfare of the public and my officers at risk. We will work tirelessly to hold them accountable and bring them to justice. "

San Jose Mayor Sam Liccardo is on the east coast but told ABC7 News by phone that he supports what police did.

A task force is being created to review photos and video to identify and prosecute instigators.

Police don't know if the protestors who attacked attendees were from the South Bay or came here from outside the area.

Police say one officer was assaulted Thursday night. There were no reports of any significant property damage.