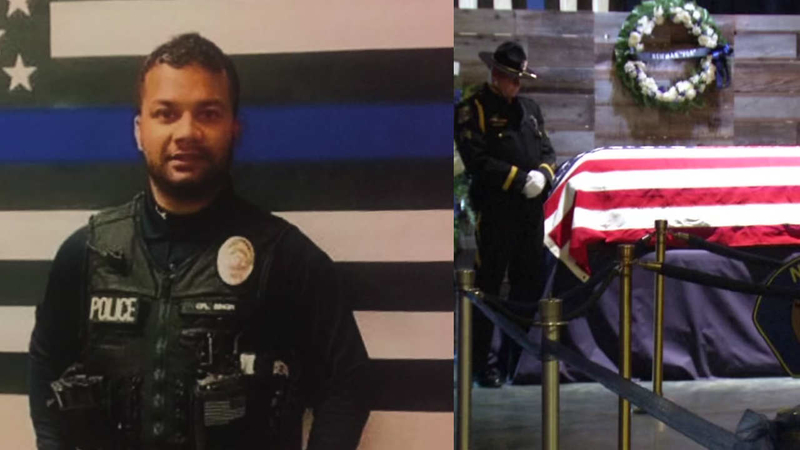 NEWMAN, Calif. (KGO) -- A somber procession in the Central Valley on Friday as a tribute to Corporal Ronil Singh, who was killed in the line of duty last week as he made a suspected DUI stop in Newman, south of Modesto.

Singh was a popular 33-year-old canine officer in Newman for seven years. Photos and flowers lined the aisles of the theater in downtown Newman with Singh's flag draped casket at the front. He leaves behind his parents, my brother, his wife and a five-month-old son.

"It's hitting everyone and it's very sad it happened, and we cannot come to terms with it," Alvin Prakash, a close friend said.

Bay Area residents said they made the drive to Newman to remember a true hero. Early Friday morning a procession of officers Welland its way through the central valley from Modesto to Newman, a town of 10,000 people. The main street was awash in flags and blue ribbons and tears. Police Chief Randy Richardson said there were 11 officers, but now they're down to 10 and feeling the loss deeply. "We are not so much a department but a family so every one of us is hurting," Richardson said.

President Trump called the chief to offer his condolences as officers representing all 58 counties in California offered a final salute. The procession for corporal Singh then departed Newman at noon to head back to Modesto.

Singh's funeral is open to the public on Saturday at 10 a.m. at the Crosspoint Community Church in Modesto. Over 1,400 law enforcement officers from across the country are expected to be on hand to salute a fallen hero.

The suspect, Paulo Virgen Mendoza, who was previously identified by an alias, was charged with murder Wednesday.

Four others are accused of aiding Virgen Mendoza while he was on the run were scheduled to be in court Friday. Their bail is set at $100,000 each.