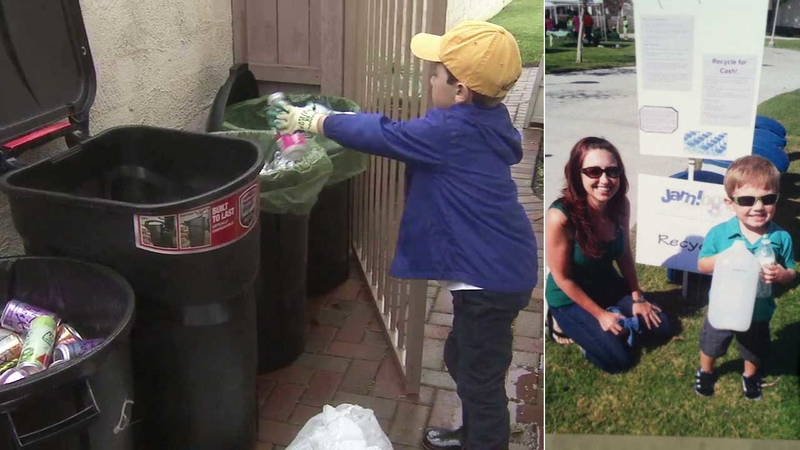 SAN JUAN CAPISTRANO, Calif. -- A 7-year-old boy in Orange County combined his entrepreneurial spirit and passion for the environment to start his own recycling business, saving a whopping $10,000 for college.

Ryan Hickman began recycling when he was just 3 1/2 years old.

"We had gone to the center with a couple of bags, and he really loved the actual act of putting all the cans and bottles into the machine and getting the money for it, and that kind of got him hooked," described Damion Hickman, Ryan's father.

The then-toddler enlisted the help of friends and family and has since started his own business, Ryan's Recycling.

Every week, he and his family sort through bags of recyclables.

"If it's me, my dad and my mom and my grandma doing it at the same time, one bag will be gone like in, let's say, two minutes," Ryan said.

Ryan saved more than $10,000 for college. He also sells T-shirts on his website and donates the proceeds to the Pacific Marine Mammal Center in Laguna Beach.

"For the sea lions to get food and medicine," he said.

Ryan Hickman, 7, poses for a photo next to sea lions.

Ryan's parents hope he continues saving for college, but they say he's primarily concerned with protecting the environment.

"That's a big deal to Ryan, that it doesn't, the cans and bottles don't end up in the ocean," his father said.

Ryan would also like to invest his savings in a business purchase.

Ryan Hickman, 7, poses for a photo next to a garbage truck.

The San Juan Capistrano resident receives encouraging messages from people around the world and wants to keep inspiring others.

"If you already recycle, just keep on recycling. If you don't recycle, start recycling," Ryan said.

Always the businessman, Ryan added, "If you want to buy one of these T-shirts, it's $13 on ryansrecycling.com."

The young entrepreneur has even earned the respect of Raiders quarterback Derek Carr. He sent out this tweet after seeing Ryan's Story on ABC7 Mornings.

Saw that a 7 year old is collecting recyclables so he can pay for college.. has made 10k. Get off your tail and go work hard 4 what you want