'Not enough to talk': SJ community pushes for real action at Vigil for Peace in support of Ukraine 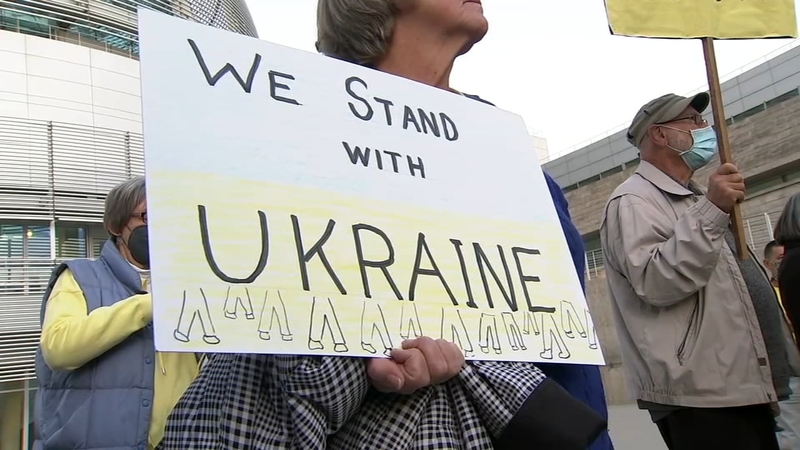 Community pushes for action in support of Ukraine at SJ vigil

Yellow and blue, the colors of the Ukrainian flag, continued to glow at San Jose City Hall. It was a fitting backdrop for the event which included a candlelight vigil and call for action.

Tuesday's event was organized by Orchard City Indivisible and other agencies.

"Now is the time to act," Kateryna Pistunova told the crowd of dozens.

Pistunova recalled the first moment she learned of the Russian invasion. The concern over her family's safety was heightened after one text.

"On Wednesday evening by U.S. time, and early morning Thursday by Ukrainian time, I got the probably the scariest text in my life," Pistunova explained. "My mom said, with huge spelling errors, that they're being shot at, that she is hiding in a cellar, that they don't have any electricity or water. And that dad has left to the military base."

She and two other young Ukrainians living in the Bay Area, described the war and their worry about family back home.

"This invasion was brutal and unexpected," Karnaukhova told ABC7 News. "And I think that the world should know what is really happening there."

"It's not enough to talk," San Jose resident Ron Oppenheimer shared. "You have to help, get involved."

Getting involved was the idea behind Tuesday's event. Organizers used QR codes to direct guests to donate, write representatives and President Joe Biden, and access much needed resources.

Oppenheimer said taking that extra step and taking action is why he showed up.

"It's not because I'm Jewish, and not because I have Ukrainian grandparents who are not living now," Oppenheimer said. "It's because I believe in democracy and I don't believe in the massacre that I'm seeing by a person named Putin."

Beyond thoughts and prayers came a push for real action.

As Ukraine turns to Amazon for critical supplies, a Bay Area lawyer from Ukraine is trying to help with a fundraiser for night vision goggles.

And at San Jose City Hall, a glowing reminder of the support for Ukraine. The colors of the flag- yellow, symbolizing grain grown in Ukraine. Blue, representing the country's peaceful skies.

"This is actually very nice to see," Karnaukhova said. "Because we need peace."

Orchard City Indivisible shared a resource for additional information on support for Ukraine, which you can see here.