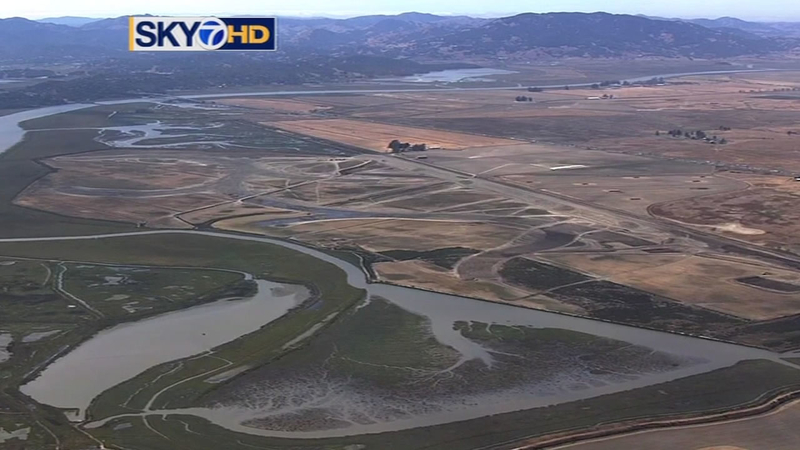 SAN FRANCISCO (KGO) -- Construction is ramping up on two major projects to restore wetlands around San Francisco Bay. More than 85 percent of bay wetlands were drained over the last 150 years, but partnerships between non-profit and government agencies are slowly turning back the clock. Together they make up the largest coastal wetlands restoration effort in the country. The two newest links are in the North Bay.

One project is near Sears Point in Sonoma County, south of Highway 37, on a piece of land that was once planned to be the site of a new Indian casino. Instead, it's being put back the way nature intended.

Julian Meisler is Baylands program manager for the Sonoma Land Trust which is leading the effort to turn the property back into 1,000 acres of tidal marsh. It is a huge job with crews moving more than a million cubic yards of dirt. Meisler estimates that is enough to fill a line of dump trucks stretching from San Francisco to Los Angeles. Sonoma Land Trust helped raise $18 million for the project, which is now the largest private tidal marsh restoration on the West Coast.

About 10 miles east, near Mare Island in Solano County, another big wetlands restoration known as Cullinan Ranch is also taking shape. That project is led by the U.S. Fish and Wildlife Service. It will cost $15 million to restore 1,564 acres that will become part of the San Pablo Bay National Wildlife Refuge. The area was farmed for oats and hay until the federal government bought the land in the early 19 0s.

Craig Garner is with a non-profit organization called Ducks Unlimited, which is a partner in both projects. Garner said there is a lot of momentum now for wetlands restoration. "We've done a lot and we expect to do a lot more."

Wetlands are vital for wildlife, and it turns out they are critical for people too. The marshes provide a buffer zone during high tides and storms to prevent flooding in nearby communities. Wetlands also filter out pollution before it gets into bay water. According to Meisler, they are also "one of the greatest types of habitats to store carbon out of the air, which is one thing we really need to slow the rate of climate change."

Both wetlands restoration projects connect to other marsh restorations and both face big construction challenges.

The Cullinan Ranch project requires reinforcing a levee along Highway 37 so it will not be compromised when bay water comes rushing in. The process includes big white blocks of foam that are now stacked up along the highway.

Garner said the blocks are similar to Styrofoam you would find in an ordinary cooler. "It's a little more compressed, but it provides that lightweight fill and a little bit of buoyancy as well."

The foam is placed in a trench next to the highway and wrapped in huge plastic sheets before being covered with dirt.

Levee breaches for both projects are scheduled for next year, but it is expected to take several decades for nature itself to fully complete the restorations.

The projects include a lot of great public access for hiking, biking and kayaking. If you want to keep up with the progress check out the Sears Point Wetlands and Cullinan Ranch Wetlands websites.