San Francisco launches anticipated mobile recycling service, but not everyone is happy 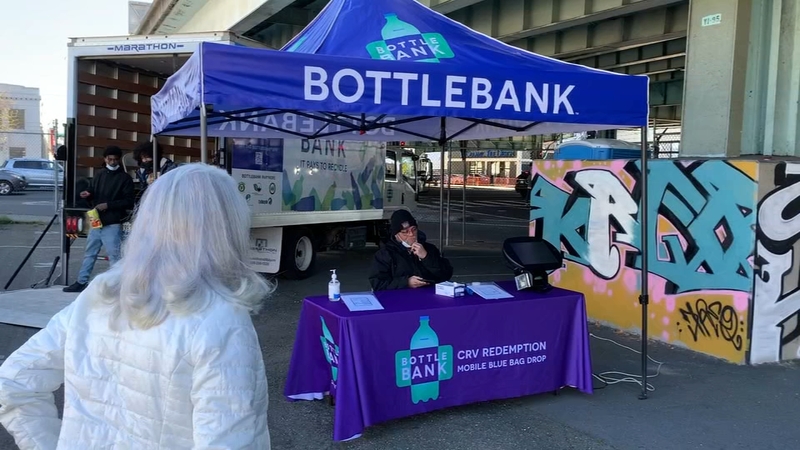 SAN FRANCISCO (KGO) -- San Francisco's new container recycling program is now up and running. The city used to have hundreds of places to return your bottles and cans: stores that sold the items and recycling centers.

A new law scrapped all of that and put into motion a mobile program with roaming trucks to be set up around town and take in your empties. The new "BottleBank" program launched in early January and so far only two trucks have been deployed and they aren't roaming. They are stationary at two locations.

Charles Sheehan is with the San Francisco Department of the Environment and he tells 7 On Your Side, "So we're starting small, but we are planning on scaling up the program gradually and so as the word gets out, as we do outreach, we will add new locations and the goal is to be in every district within the city."

7 On Your Side tries out the new BottleBank mobile recycling program launched in San Francisco. Here's what to know.

"Doesn't look like it's doing too good to me," says Jamie Court from Consumer Watchdog. "I mean they're in like two locations for like a few hours every morning, on the weekdays not the weekends, so most people aren't going to be using this facility, and it doesn't replace every retailer in San Francisco who was required to take back cans and bottles."

Although the BottleBank idea was sold as convenient, not all San Franciscans see it that way.

"For someone like me who doesn't have a car," says San Franciscan Adrienne Gembala, "I would be reliant on either a bicycle or taking the bus to get to these locations, there are only two in the city that I have seen when I've checked the app a few times."

The app she is talking about starts off with a bit of confusion: when viewed in the app store, it says "Oregon Beverage Recycling Cooperative." Turns out the app was developed in Oregon, but works here in San Francisco.

Once the app is downloaded, it is time to gather up your bottles. With this new program you must use specific blue BottleBank bags to return bottles and cans. The website shows where bags can be found. When 7 On Your Side's Michael Finney went around town spot-checking stores, none could be found on the shelves and when asked for them, employees sometimes had no idea what Finney was talking about. Other times Finney was handed a kind of starter kit with two bags and instructions.

"If you go to the store right now they're just carrying the two-pack bags, and if you go to customer service, they should be able to give them to you and for a limited time they're giving them to participants for free," says Sheehan. "Going further into the program the stores will start carrying and selling eight-pack bags, and they certainly will plan to start carrying those eight-pack bags, probably the next month or two, maybe even a little bit sooner."

7 On Your Side asked Jamie Court what he thinks of the blue bags.

A mandatory composting law will be coming to California in January, creating an energy source from food waste.

"I think they're plastic. I don't understand why a recycling program would use a plastic bag, it seems like the opposite of what you would want to do," Court says.

At the BottleBank site Michael Finney visited, those running the place could not have been more helpful or friendly. They checked the app, then checked in the bags of bottles and cans Finney brought for recycling. They explained the containers will be tallied later and the deposit will be sent to the app where it can be transferred to a financial accounts.

The BottleBank says it can take as long as three days before the payment is received. 7 On Your Side took in our bottles and cans on Tuesday around noon. Friday at 1 p.m., it still had not been paid.

A couple final points: With this program, you don't squash the cans. There is a Saturday availability at Stonestown, and there are also two stationary recycle centers still operating in the city.

When the bags are sold, they will cost a couple of bucks, which means it will take about fifty containers before breaking even.