KGO
By Julian Glover
SAN JOSE, Calif. (KGO) -- A Bay Area developer has created the app Shea'd to promote Black-owned businesses in the area. The app is just one of a number of apps Apple is highlighting on Juneteenth ahead of its annual World Wide Developers Conference.

"Shea'd is kind of sparking new relationships with business owners and community members in each place that we decided to like set up shop," said Ibrahim Conteh, one of the app's co-founders.

Conteh is a Bay Area native.

He grew up in San Jose and currently works in the tech industry as an engineer.

Shea'd is gaining popularity at a time when people are actively looking to support Black-owned businesses. Many have been forced to close permanently due to the coronavirus pandemic while others are struggling to stay open.

Ms. Glitter Nails located in the Opportunity Zone of East Oakland was one of the first shops featured on Shea'd at launch.

The shop's owner, Tonia Z, said she has gained a number of new clients from the app and hopes it will help her find new customers when nail salons are finally allowed to reopen in Alameda County.

"We need to help support Black business," said Z. "We need to unify and help circulate the Black dollar."

Shea'd features more than 100 black-owned businesses in the Bay Area and helps users find everything from salons and barbershops, to gyms and even coffee shops with Black ownership.

"Shea'd has helped certain business owners get a new customer base," said Conteh, "Just knowing that gives me more juice to go harder at this thing."

This Friday on Juneteenth, the holiday celebrating the end of slavery in the United States, the Apple App Store will feature a number of apps like Shea'd, created by Black developers.

Silicon Valley has long been criticized for its lack of diversity. For the last five years major tech companies have publicly released diversity and inclusion statistics on its workforce.

While notable gains have been made in adding more female employees to the Silicon Valley workforce, the industry has seen little movement in the number of Black employees, specifically those working in technical and leadership roles.

Apple believes its App Store is one of the ways it can help elevate Black voices at this critical time.

"We believe apps are for everyone. So they should be made by everyone," said Smokey Fontaine, editor-in-chief of the App Store. "The whole App Store gets stronger when we add these diverse voices."

The first step in adding those diverse voices is investing. Apple just announced it is launching a new Entrepreneur Camp focused on giving more young, black developers one-on-one training and the tools they need to thrive in tech.

"These young folks who can graduate from these entrepreneur camps to create these tools for their own communities that will pay it forward in so many ways," Fontaine said.

Apple has not provided a firm date for when the new Entrepreneur Camp will launch - only saying soon.

The previous camp focused on strengthening organizations founded and led by women. The company invited 100 women from across the world to participate.

Conteh hopes to eventually expand Shea'd to other metro areas, a website, and to other mobile devices.
Report a correction or typo
Related topics:
societysan josesilicon valleytechnologyappleapp
Copyright © 2021 KGO-TV. All Rights Reserved.
RELATED 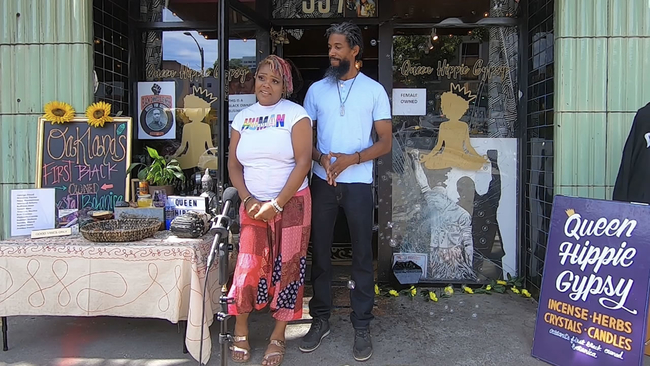