One of the biggest issues discussed was defunding the city's police department.

During Mayor Libby Schaaf's Virtual Town Hall on "Structural Racism and Police Reform," she addressed why defunding the police is not the way to go.

"The current proposed budget for the city cuts roughly $5 million out of the Oakland Police Department's budget and it adds roughly $22 million to things like affordable housing, homelessness services, job training," the mayor said. "We had to cut $122 million due to COVID related revenue losses. I do not believe we need to defund in order to invest in these community priorities."

RELATED: Poll: Majority of Americans do not support 'defund the police' movement

Burris said he's inspired by the movement he sees by George Floyd, but that his death is a small issue of a bigger problem.

"I don't want in any way to undermine and belittle the point cause it's a death," Burris said. "We have deaths all the time. I've been involved in two death cases since then, but the challenge that we're facing is more aligned with what the mayor is talking about, and all of you are talking about that the momentum that's needed to be generated are we taking care of the issues of communities that suffer where there's health, education and employment."

Lt. Fred Shavies joined OPD in 2006 and was promoted to lieutenant a few years ago. He is completely on board with creating a more robust team on the police department that specializes in mental health calls.

"We respond through this safety lens and often times, even the mere presence of the police can escalate a situation based on the harm our uniform represents," Lt. Shavies said.

"We have a team that's through the Alameda County Department of Public Health, if we had a more robust team that was equipped to deal with that segment of our society- I can't see in anyway how that would hurt," Lt. Shavies said.

During the Citizen Police Commission, several public speakers spoke out to defund the OPD, some said by 50 percent.

Interim Police Chief Susan Manheimer addressed the commission about the department's recent response to demonstrations where smoke, gas, and specialty impact munitions were used at protests on May 29, 30, 31, and June 1.

"I want to assure you, we have not used, smoke, gas or SIM projectiles for over five years. We saw protests, riots, and disruption that we have not seen in a very long time," Chief Manheimer said.

The Chief also proposed a special order to ban carotid restraint, a chokehold, in Oakland.

"We have had the carotid restraint utilized by in our policy, however we have suspended the training on that it is our intention to once you can provide that direction to take it out of our policy," Manheimer said.

"I remain concerned as I hear that Oakland Unified School District is looking at eliminating their entire police force. And those 25,000 calls for servicing a year, I don't know where exactly they're going to go because frankly we have calls standing every single night," Manheimer said.
Report a correction or typo
Related topics:
societyoaklandopdgeorge floydlibby schaaf
Copyright © 2020 KGO-TV. All Rights Reserved.
RELATED 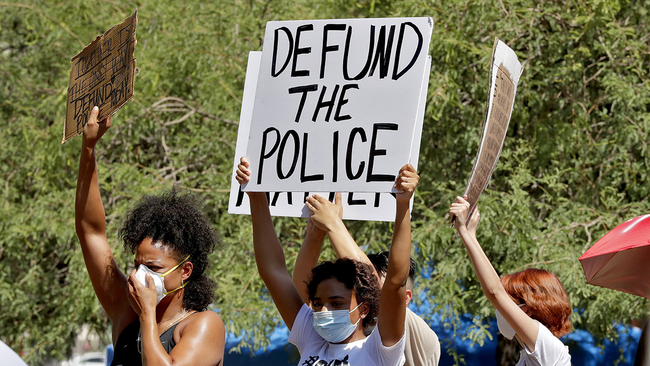