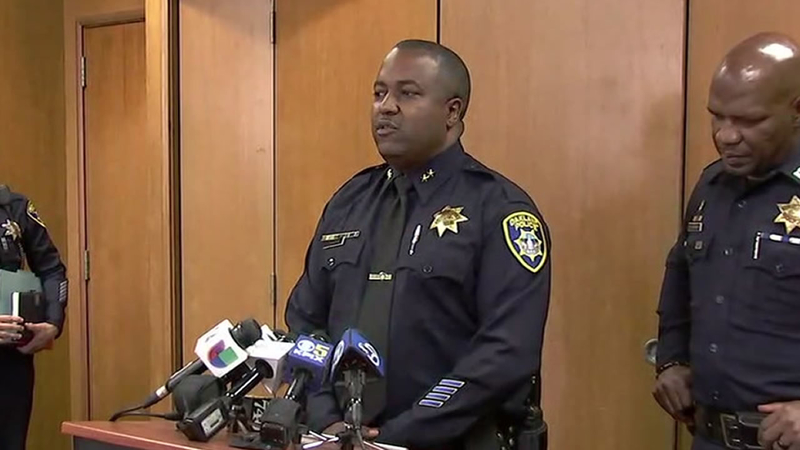 OAKLAND, Calif. (KGO) -- After a year without an official top cop, the City of Oakland will now have a new police chief, born and bred in the city. First reported on ABC7 News Thursday night, Mayor Libby Schaaf officially announced the selection of OPD veteran LeRonne Armstrong Friday morning

"It is really my honor to offer you the position of chief of police of the city of Oakland. Do you accept?" said Schaaf on a video released this morning with Armstrong.

He is of Oakland and for Oakland. Born + raised, tried + true, and ready to lead as we reimagine public safety and build safety + security in all neighborhoods. It is my honor to announce LeRonne Armstrong as Oakland’s Chief of Police. pic.twitter.com/cobzmoLzX0

"Thank you. Yes.," replied the 22-year veteran of the department.

Armstrong is a man with deep roots in the community.

"I plan to bring a leader that's grounded in Oakland, is centered around safety, the saving of lives," said Armstrong after accepting Schaaf's job offer.

"He's the man for this moment. He's ready," said Regina Jackson, who sits on the Oakland Police Commission. "He's been in waiting for several years and we're going to support him. We'll hold him, but we're also going to hold him accountable."

Currently serving as deputy chief, Armstrong joined the department in 1999. His promotion that comes nearly one year after Anne Kirkpatrick was fired by Schaaf. Kirkpatrick was a newcomer to Oakland, while Armstrong was born and raised in West Oakland where he attended McClymonds High School.

"He's always just a phone call away and he's a person that can relate to our community, which is something we really need," said Cleveland McKinney, longtime McClymond's administrator and friend of Armstrong.

"I think it's important for the image of the African American males, from that community, from the city of Oakland or from any urban area, that an African American man from an urban area, a deprived area, can uplift himself," said Oakland civil rights attorney John Burris, a frequent critic of OPD over the years.

Armstrong will face rising crime in Oakland, deep budget cuts and an ongoing process of re-imagining police services in a way that will divert some duties away from sworn officers.

"I know personally that Chief Armstrong has been impacted by crime and public safety challenges we have in Oakland," said City Councilman Lorne Taylor, "and I know he has the commitment to really solve those."

In her video announcement Friday morning, Schaaf asked Armstrong: "What do you think your brother would say if he were with us today?"

"I think he would be saying how proud he was of me, how proud he was of his younger brother," said an emotional Armstrong, "Having a dream and then making good on that dream."
Armstrong is well aware he can have an immediate impact on his community.

"African American boys that are going to see me and think, I can do that," he said.