SAN FRANCISCO (KGO) -- Yes, it's a problem. One we drive by, step around, and try to ignore. A problem personified, today, by Dale Harris and his dog, Bruiser.

Dale has a dream. "I'd be living in a home somewhere."

It's not an escape from the Tenderloin, but certainly a perch above it.

The rooms are basic, but for people coming from San Francisco streets, this environment can transform lives.

One working solution to homelessness in San Francisco--the Minna Lee on 6th street. Subsidized permanent housing by the city. Residents like Robert Wynder pay 1/3 of incomeS for rent. "People used to look at me like trash. Now, they wouldn't know I used to be homeless. #abc7now pic.twitter.com/jGtnQmEA17

"They looked at you like you were disposable. Trash," said resident Robert Wynder, a veteran.

"You can't be civilized socially. You feel terrible about yourself," Natalie Notaro told us.

Both live here in permanent housing, subsidized by the city.

The Minna Lee is one of eight leased hotels in buildings in San Francisco, and home to almost 600 formerly homeless tenants, who pay a third of their incomes for rent.

"The science is in. Supportive housing works. It is cheaper than jail and emergency rooms, and people do well with it," said Doug Gary, co-director of the non-profit, Delivering Innovation in Supporting Housing.

With 28,000 homeless in the region, people are looking for ideas.

Ultimately, he says, it comes down to finding and making space.

"We all wish we had a magic wand to make more housing happen."

Program does change lives. Resident Natalie Notary spent ten years on the streets. Drugs dragged her down, despite her being 15 credits short of a masters degree. "I am so happy to be inside you don't even know." She's looking for work. #abc7now pic.twitter.com/6uOh7wTGUY

The problem remains as complex as its victims. Natalie worked as a dental technician, a retail manager, was 15 credits short of a masters degree, and drugs still dragged her to the streets.

"People have to want to get off the street. Some people don't want to."

"Now, you can't look at me and know I was ever homeless," said Robert Wynder.

To solve a problem, find a model. Then duplicate it.

Natalie leaned out of her door.

"I had a drug problem but now I am clean. So happy to be inside you don't even know," she said. 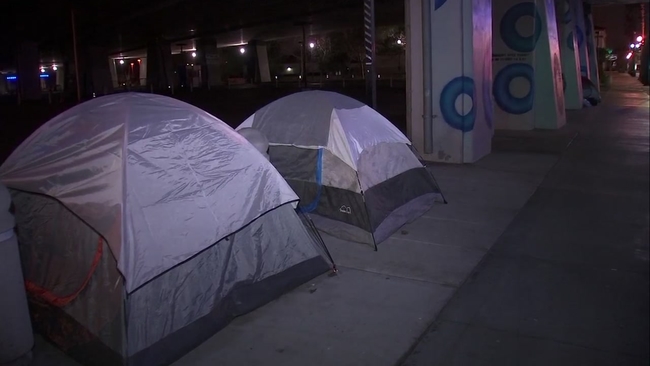